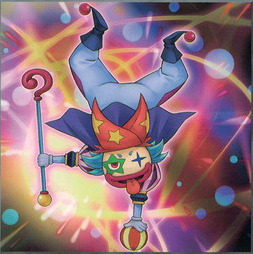 In works of fiction, clowns and magical powers seem to go hand-in-hand. Whether good or evil, it's not unusual for even otherwise seemingly-normal clowns to have a multitude of magical powers on their side - or even turn out to not be human at all.

This trope probably goes back to The Middle Ages, when Real Life jesters would perform magic tricks for people on the street, or in the houses of those with higher social status. This trope may be effective because a clown calls up the wonder and imagination of childhood or the willing suspension of disbelief of a stage show. For example, the Clown Car act - it seems impossible to fit that many people in such a small car.

The cause of this trope may also be similar to that of Monster Clown or Villainous Harlequin- with their deformed faces and outlandish behavior, clowns seem very Ambiguously Human.

Even if the clown is evil, don't expect his or her magic to be dark and scary. Clown magic is almost always bright and colorful, to reflect their flamboyant costumes and personalities. For this reason, Playing with Fire and Light 'em Up are common Elemental Powers used by clowns.

Compare Magicians Are Wizards, another trope about costumed performers having magical powers, and Circus of Magic, where an entire circus is magical. For more clowns with extraordinary abilities, see Robot Clown. Not to be confused with Monster Clown, although, due to the prevalence of that trope, there is a pretty large overlap. Also not to be confused with Fighting Clown, which is not always about literal clowns.

Balan is a mysterious but charming showman who runs a magical theater.

Balan is a mysterious but charming showman who runs a magical theater.