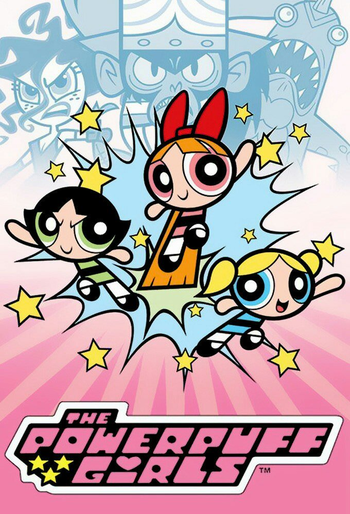 Saving the world...before bedtime!
"Sugar... spice... and everything nice. These were the ingredients chosen to create the perfect little girls. But Professor Utonium accidentally added an extra ingredient to the concoction: Chemical X! Thus, the Powerpuff Girls were born! Using their ultra-superpowers, Blossom, Bubbles, and Buttercup have dedicated their lives to fighting crime and the forces of evil!"
—The oh-so-Interactive Narrator
Advertisement:

One of Cartoon Network's most popular original series and the first entry in its eponymous franchise, The Powerpuff Girls is an action-comedy series revolving around a Power Trio of Little Miss Badasses who fight crime and evil forces in the fictional city of Townsville. These Artificial Human girls, who have no fingers, toes, flat feet, ears, or noses, were created when Professor Utonium accidentally added a mutagenic substance called Chemical X to his mixture of sugar, spice, and everything nice while trying to "create the perfect little girls."

The series' heroes are Blossom, "commander and the leader," Bubbles, "the joy and the laughter," whose personality is very similar to that of her namesake from Jabberjaw (but not quite a Dumb Blonde), and Buttercup, "the toughest fighter," and a tomboy with a bad attitude. Their simian Arch-Enemy Mojo Jojo wears a helmet to cover his enlarged brain and speaks in a manner reminiscent of bad anime dubbing.

The concept began life as creator Craig McCracken's CalArts thesis film, titled "The Whoopass Girls" (they were created with "sugar, spice, everything nice," and a can of Whoopass) and was then adapted, with a slightly safer-for-work name, into two pilots for the What A Cartoon! Show. Cartoon Network decided to go with one of the other shorts, created by McCracken's friend and former 2 Stupid Dogs colleague Genndy Tartakovsky, as their first series, giving McCracken a little more experience before his show finally went to series in 1998. Both artists worked on one another's respective shows.note It's widely believed that both shows exist in the same universe, as multiple In-Universe fictional characters from Dexter's Laboratory, such as Major Glory and Puppet Pals, have appeared in the The Powerpuff Girls.

Warner Bros. released a feature film, The Powerpuff Girls Movie, in 2002 (which bombed at the theaters, likely due to a severe decline in popularity that began in early 2001). A comic book series (from DC Comics no less). An anime version, Powerpuff Girls Z, hit the airwaves in Japan on July 1st, 2006.

The original series was the final production to be created under Hanna-Barbera's name. The studio's assets were absorbed into Cartoon Network Studios following Bill Hanna's death at the end of Season 4.

Tropes, spice, and everything nice:

So, once again, your life is ruined, thanks to TV Tropes!

A Made Up Story

A Made Up Story