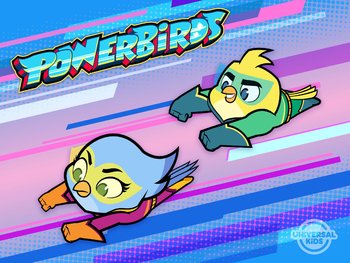 Saving the day one page at a time!
Advertisement:

Powerbirds is an American animated series aimed at preschool audiences that premiered on Universal Kids on January 19, 2020. The brainchild of nationally syndicated editorial cartoonist and children's author Steve Breen, the show is based on a series of kids' books he wrote.

Ace (voice of Cory Doran) and Polly (voice of Tara Strong) are two parakeets owned by a six-year-old boy named Max who loves superheroes. Whenever Max is busy for the day however, the two birds are living out their own lives as the Powerbirds, two pint-sized superheroes who battle villainous animals to protect their neighborhood.