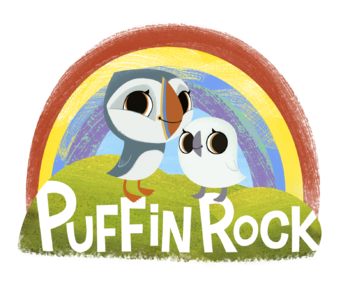 Puffin Rock is a Preschool Children's show from Cartoon Saloon, the same studio behind The Secret of Kells and Song of the Sea.

It centers around a young puffling Oona and her even younger puffling brother Baba as they find themselves on adventure after adventure, learning about the wildlife of their home sweet home, the eponymous island of Puffin Rock. The show is narrated by Chris O'Dowd.

The show can be seen on RTEjr in Ireland and on Nick Jr. in the United Kingdom and pretty much everywhere else (including the United States and Canada) on Netflix.

This show contains examples of these following tropes: