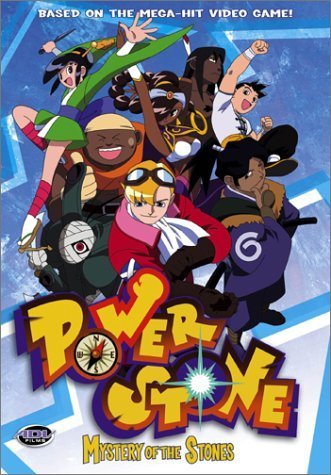 "Long ago, in the land where legends are born, it is said that one strange and special night — a night shrouded in mystery — seven sacred stones received a magical burst of energy. The stones grew so powerful that nothing could contain them. When these seven stones are reunited, a new age of wonders and miracles will occur!"
Advertisement:

A 1999 anime based on the Power Stone series of games. It starts off as aspiring aviator and prize fighter Edward Falcon recieves a package from his father, who has been away exploring for several years. It turns out to be one of the seven Power Stones: legendary gems with the ability to transform those who hold them into a superpowered form, and when all united, are said to be able to perform miracles. He sets out to find his long-missing father, and with him the secret of the Power Stones.

Along the way, he meets, among other things: a samurai, a family of performing ninjas, a martial artist chef who turns into Goku, a band of evil pirates, a Native American warrior tribe, a belly-dancing Fortune Teller, and Jack.

Notably, the English dub was only shown in Canada on YTV, and unlike most anime of the era, many elements such as bloody violence, guns and Fanservice on all sides managed to slip past the censors. The entire series in English can be found here.

"According to legend, the bearer of a Power Stone cradles in their hands the power to destroy, or create. The power to conjure darkness, or bring great light. The power to make any dream come true!"