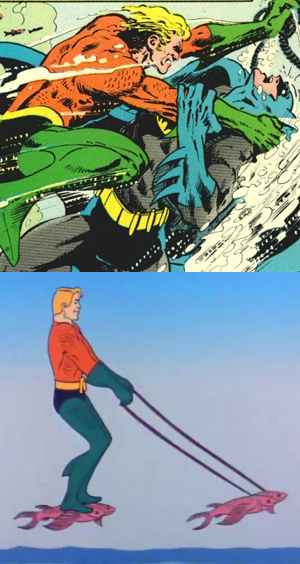 Top: Can take on Batman himself.
Bottom: The reason why everyone still thinks Aquaman is weak. (Wait a minute, how are those flying fish supporting his weight?)
"I never read any of the comics, so I don't know what Silver Surfer's powers are, but isn't he supposed to be pretty strong? So why'd they make him into a wimp?! Why is he fucking up rubber ducks and weeping like a crybaby?"
— The Angry Video Game Nerd, Silver Surfer (1990)
Advertisement:

So there is this character, strong, independent, intelligent and resourceful. They are a valued member of any team and more than contributes their fair share to the team. They might not have been a true bonafide badass, but at the very least they were capable of standing on their own. Then the work was remade by new writers and everything changed. The once awesome Action Girl is now a Damsel in Distress. The Badass Bookworm is now just a plain old Nerd. The Action Survivor is now just The Drag-Along, or worse.

This character has been the victim of Adaptational Wimpification. The reasons behind this happening are varied, and not inherently a result of bad writing. A character may be reduced to a cameo and their most notable contribution passed on to a more prominent character. The character may have been The Ace as an Invincible Hero and this trope makes them a more compelling protagonist with real dramatic concern for their safety. Or perhaps their less active traits were eliminated to make them more specialized in a team of badasses. Or maybe the adaptation is Lighter and Softer than its source material, and the writers made those vile villains harmless to avoid scaring the kids.

As with the inverse trope Adaptational Badass, this is not about characters who suffered a minor power decrease or had their most badass moment cut from the adaptation. It is when their usefulness, agency, and contribution to the plot is significantly reduced. It is not this trope when the character "only" easily defeated twenty Mooks instead of a hundred; it's when the character struggled to take down even one. Realize too, that this may be intentional and in a long-running series may have the character take a level in badass to provide Character Development and align them better with the original version.

Something similar often appears in parodies, either exaggerating a character's existing weaknesses or just as a cheap way of making them look ridiculous.

Contrast Adaptational Badass and Adaptational Skill. Compare Badass Decay, Chickification, and Took a Level in Dumbass, for when the character becomes a wimp within the original work. Often happens in the case of a character who isn't fully understood by the new writers. Not to be confused with Ukefication, which is a fanfiction specific variant of this often occurring in Hurt/Comfort Fic, most often in Slash Fics (and usually affecting more on an emotional level). Particularly awful cases of this have been known to cause an Audience-Coloring Adaptation.

As always, remember that Tropes Are Tools. This trope can be (and often is) invoked on purpose in order to tone down an Invincible Hero or Invincible Villain, thereby adding more suspense and drama to the work. Resist Complaining About Shows You Don't Like or screaming that something is Ruined FOREVER.

Nostalgia Critic rants about how underpowered the movie earthbenders are compared to the show.

Nostalgia Critic rants about how underpowered the movie earthbenders are compared to the show.