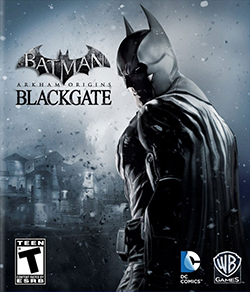 Gordon: Batman, they're all in there, from petty thieves to the worst of the worst. And almost every one of them has a grudge against you.
Batman: Then they're about to get their shot.
Advertisement:

Three months after the assassination attempt on Batman, a mysterious explosion occurs at Blackgate Penitentiary. A riot breaks out as the inmates take control of the prison, with Joker, Penguin, and Black Mask each ruling different sections. Batman is called in to investigate the cause of the explosion and get Blackgate back under control.

On February 20, 2014, an HD port of the game, titled Batman: Arkham Origins Blackgate Deluxe Edition, was officially announced for PlayStation 3, Xbox 360, Wii U and Steam.

Catwoman: What a lousy first date.