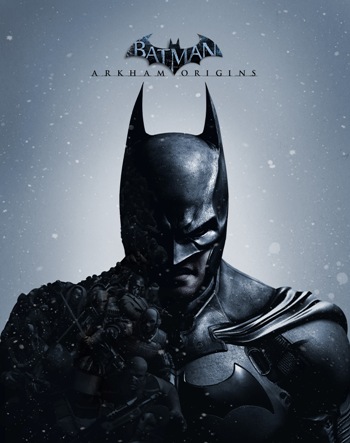 Your enemies will define you.
"This city has a problem: some freak who thinks he's a hero. Luckily, there ain't a problem in the world that can't be solved with a little bit of money…"
— Black Mask
Advertisement:

The third game in the Batman: Arkham Series (but the first in the timeline), released worldwide October 25th, 2013.

Set eight years before Joker takes over Arkham Asylum, Batman is in his second year as a crimefighter. Notorious crime boss Black Mask has offered a substantial reward to anyone who can kill the Dark Knight. On Christmas Eve, eight of the world's deadliest assassins gather in Gotham City to collect Black Mask's bounty. At the same time, a number of corrupt cops in the GCPD are also looking to claim the reward. Batman must learn why Black Mask wants him dead, fight off his assassins, and prove to Gotham that he is a hero to be trusted.

Notably, Rocksteady did not develop the game - instead, WB Games Montreal (who did the Wii U port for Arkham City) took up the reins, allowing Rocksteady to focus on making Batman: Arkham Knight. Similarly, the voice actors for Batman and Joker, Kevin Conroy and Mark Hamill, have been replaced by Roger Craig Smith and Troy Baker respectively. Both voice actors do admirable impersonations of their predecessors, reflecting the game's status as a prequel.

The PC, PS3 and Xbox 360 versions of the game also include multiplayer. Players must take control of armed thugs in the Joker or Bane's gang, and try to kill each other while also fighting off two players stalking them as Batman and Robin.

A story-based DLC, "Cold, Cold Heart," was released on April 22nd, 2014. It focuses on Batman's first encounter with Mr. Freeze, heavily based on the episode "Heart of Ice" from Batman: The Animated Series.

, and the first gameplay trailer can be viewed here