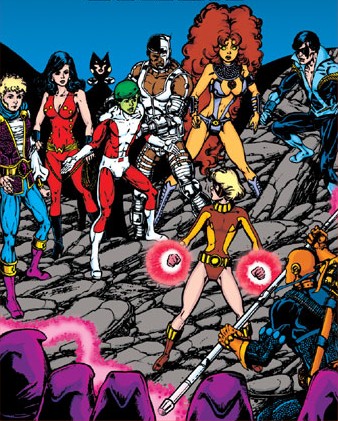 Terra, choose your side!
Advertisement:

The Judas Contract, by Marv Wolfman and George Perez, is the most famous story arc of the Teen Titans franchise.

Once upon a time, Changeling met Terra, a teenager with a lovely face, the metahuman ability to manipulate rocks, and the social skills of Wolverine. He immediately fell in love with her, despite the fact that she was a villain robbing banks, and believed he could redeem her. The Titans discovered that she was forced to commit crimes by a terrorist group that claimed they held her parents hostage, though it turns out that her parents had actually died. Changeling noticed a few lies—things that did not make sense—but the Titans eventually accepted Terra as one of them anyway. Terra took issue with the Titans concealing their secret identities, so as they came to trust her, they revealed their true identities to her.

A week after that reveal, Deathstroke captures most of the Titans by setting traps at their homes. Dick Grayson, who had resigned from the Robin persona and become Nightwing, manages to escape the trap. He soon confirms that he's the only free Titan left, and while at Titan Tower, he's surprised by Adeline, Deathstroke's ex-wife, who reveals details about Slade's activities - including Terra's betrayal of the Titans. Adeline's son, Jericho, joins Nightwing and travels to the country where Deathstroke has taken the Titans for H.I.V.E. While Nightwing saves the Titans, Jericho possesses the body of his father and attacks Terra with it. Thinking that Deathstroke has turned against her, an enraged Terra goes on a literal earth-shattering rampage and eventually kills herself.

The original Teen Titans animated series dedicated the bulk of its second season to a version of this storyline. After years in Development Hell, a stand-alone Animated Adaptation—Teen Titans: The Judas Contract—was released in 2017. The third season of Young Justice also incorporates elements of the storyline. 2017's The Lazarus Contract, a crossover between Titans (Rebirth), Teen Titans (Rebirth) and Deathstroke (Rebirth), serves as a Spiritual Successor to this storyline.

The Judas Contract contains examples of: