Comic Book / Who Is Donna Troy? 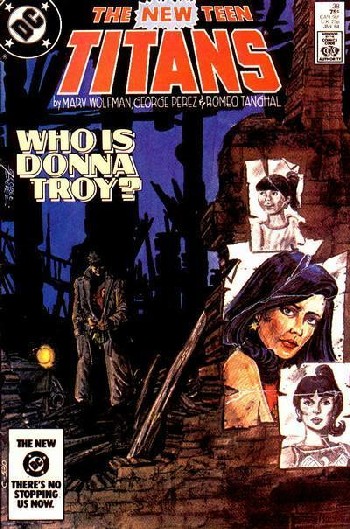 Who is Donna Troy? is a 1984 story of the Teen Titans, in their issue #38. It is one of the most remembered stories by Marv Wolfman and George Pérez with the Titans.
Advertisement:

At this point, Donna Troy knew very little about her origins. As a young child, she was in an apartment fire and was rescued by Wonder Woman. Wonder Woman took Donna to Paradise Island, where Donna was adopted as Wonder Woman's sister and received similar powers with the Amazon science. However, her life before the fire was a complete mystery. In fact, Wonder Woman could not identify her parents because the apartment was not even rented, and nobody was supposed to be there.

In modern day, Terry Long proposes marriage to Donna, but she's unsure because she does not know anything about her past. So Terry asks Robin, the best detective he knows, to investigate it. Checking around the burned house, Robin finds an old doll with something written on it: "From Uncle Max, from Mystic Mt. Newport News". Grayson locates "Uncle Max", who used to repair toys for an orphanage using that alias. The orphanage is now closed, but Robin finds the elderly woman who ran it, Elmira Cassiday, who recognizes Donna on sight. Donna's mother had put Donna up for adoption because the mother was dying of cancer, and Cassiday gave Donna the doll before Donna was adopted by the Stacey family. Happy ending?

Not yet. Dick Grayson wants to know who died in that apartment fire, and why. Dick and Donna eventually find Donna's adoptive mother, Fay Stacey (now Fay Evans) — the Staceys were not the ones who died in the fire. Mr. Stacey had died and Fay declared bankruptcy and could not keep Donna. It turns out that the people who died in the fire had not adopted Donna at all. They were in that apartment waiting to illegally sell Donna to someone else when the explosion and fire occurred. Now Donna Troy knows everything about her past... at least until the next crisis crossover.

Who is Donna Troy? contains examples of: