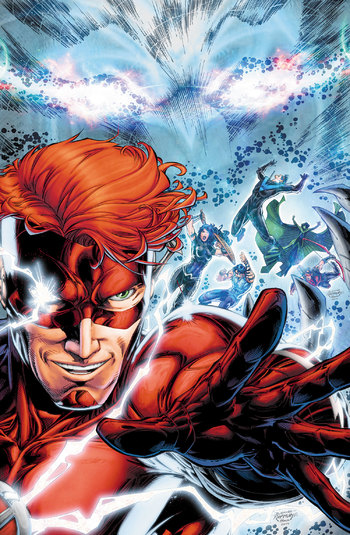 Titans is a 2016 comic book series that launched with the DC Rebirth brand, written by Dan Abnett, and drawn by Brett Booth. It is a follow-up to Titans Hunt (2015), which saw the reunion of the original Teen Titans as adults. The title features Wally West, having just returned from the Speed Force in DC Rebirth, reuniting with his former friends Dick Grayson, Donna Troy, Roy Harper, Garth, and Lilith Clay. The group is determined to find out who "edited" the DC Universe and removed Wally from the world, and at launch was the most direct continuation of that Myth Arc, which is spread out across the entire Rebirth line.

The series crossed over with Teen Titans (Rebirth) and Deathstroke (Rebirth) in The Lazarus Contract, a Bat Family Crossover that will feature Deathstroke trying to use the Speed Force to revive his dead son, Grant. It is also intended to clear up the Continuity Snarl regarding the Titans' Post-Flashpoint history, along with Deathstroke's relationship with the team, which was similarly Ret-Gone'd in the New 52.

Justice League: No Justice brought an end to the current lineup (along with those of Justice League, Justice League of America and Teen Titans). The new team consists of Raven, Donna Troy, Miss Martian, Beast Boy, and Steel (Natasha Irons), with Nightwing serving as leader. The new team formed in response to a metahuman epidemic brought about by the end of Dark Nights: Metal. Dan Abnett continues as the writer, with Brandon Peterson taking over art duties. The initial team came to an end with a Special in June 2018, and the book was cancelled outright in early 2019.