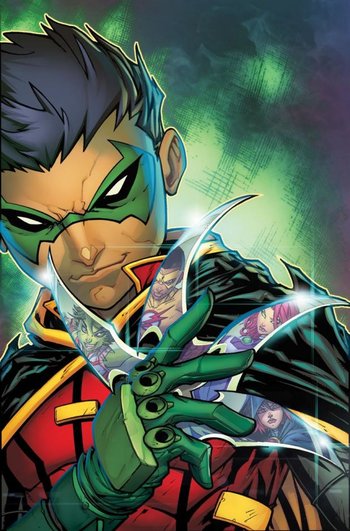 The series crossed over with Titans (Rebirth) and Deathstroke (Rebirth) in The Lazarus Contract, a Bat Family Crossover that featured Deathstroke trying to use the Speed Force to revive his dead son, Grant. It was also intended to clear up the Continuity Snarl regarding the Titans' Post-Flashpoint history, along with Deathstroke's relationship with the team, which was similarly Ret-Gone'd in the New 52.

It also crossed over with Super Sons and Superman (Rebirth) for the Super Sons of Tomorrow crossover, where Jon Kent's new, dangerous power risks the world. The team is split between working with Damian to save his best friend or aiding Saviour, a future version of former Teen Titans leader (and Robin) Tim Drake, in preventing this future from coming to pass.

The team was then broken up and Robin and Kid Flash recruited a new team in issue #20 consisting of Djinn, Crush, Red Arrow II (Emiko Queen) and Roundhouse. This incarnation of the team also participated in a crossover with Deathstroke, The Terminus Agenda, which featured another clash with Slade Wilson.