Flirtatious Smack on the Ass 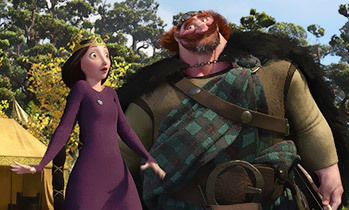 COLDHANDCOLDHANDCOLDHAND!
Tara: Every time I walk by Dan in the kitchen, I grab his ass. I'm allowed to do that cause he's my husband. He's contractually obligated to let me grab his ass.
Nash: You guys have a strange prenup.
— What the Fuck Is Wrong with You? Live - The Four Horsemen of the Axepocalypse - 9/3/18
Advertisement:

Bob walks by Alice when Alice suddenly hops in place — she felt something grab her butt for a moment and Bob just smirks to himself.

The mid-air light-spank is a customary ritual of flirtation between two (or more) animals of mating probability since fish first crawled from the ocean onto dry land. How the person who got smacked on the ass reacts differs, either with violence or embarrassed indifference. For stronger males who do this, especially with smaller females the butt-smacked female could be shown visibly rubbing her bottom after the slap whether or not they enjoyed the action.

This can be subject to some Values Dissonance when coming from older works, as nowadays it can be a form of sexual harassment. The only time this is acceptable in Real Life, of course, is the case when a woman admits she enjoys an ass smack.

This trope isn't just relegated to an open-palm. Variations like pinching and finger-brushing are included. Unlike Someone's Touching My Butt, the smack presented in this trope is usually done completely on purpose, though the tropes could be confused by the person who gets the smackin'.

Not to be confused with Shot in the Ass, Ass Pull, and Ass Shove. Compare Kinky Spanking for more than one swat. See also Pain to the Ass.

Bob and Helen have a little exchange during the Good Times Montage.

Bob and Helen have a little exchange during the Good Times Montage.