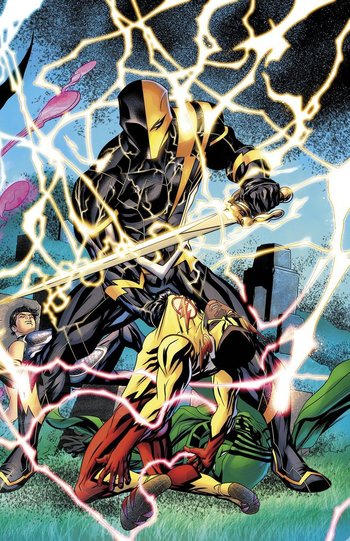 A faster "wheelon".
"My name is Slade Wilson. I'm the fastest killer alive... about to change my own destiny."
Advertisement:

The Lazarus Contract is a 2017 Bat Family Crossover between Titans, Teen Titans and Deathstroke, written by Dan Abnett, Benjamin Percy and Christopher Priest. It takes place in the May issues of those series, ending in Teen Titans Annual #1.

After the numerous tragedies his family has suffered, Slade Wilson has found a way to resurrect his dead son, Grant Wilson, the first Ravager who died fighting the Teen Titans. To do so, he needs Wally West and the Speed Force.

The crossover looks to clear up the Continuity Snarl of the Titans' post-Flashpoint history, as well as Deathstroke's relationship with the team, both of which were initially retconned out of existence. The story also features the first meeting between both Titans teams.

The crossover is intended to be a Spiritual Successor to the famous storyline "The Judas Contract".

The Lazarus Contract has examples of: