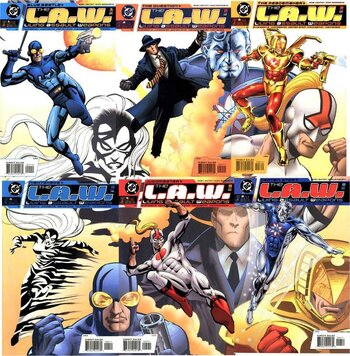 The covers of issues #1 through #6
Advertisement:

A mysterious new villain named the Avatar attacks the Justice League of America, teleporting them to another dimension. With them out of the way, the Avatar captures Captain Atom and traps him in a giant crystal as part of his plan to keep the League trapped. The Avatar the proceeds to attack military institutions across the world.

Senior Advisor of Metahuman Affairs, Sarge Steel, is tasked by the President of the United States to go to the Swiss Alps and find any information he can about the Avatar. Steel sees fit to send for his trusted operative and former Suicide Squad member Eve Eden aka Nightshade who has just undergone a procedure to remove the Succubus from her body. Meanwhile, the Question and the Blue Beetle's investigation into the Avatar's cult leads them to encounter Ripley Jagger the original Judomaster who has been banished from Nanda Parbat for his unknown connection to the Avatar. Together with former surgeon Mitchell Black, the new Peacemaker, all six of these heroes must band together to stop the Avatar's rampage.

The series debuted in September 1999 and concluded in February 2000. The series logo on each of the six covers spotlighted one specific member of The L.A.W., with the first issue highlighting "Blue Beetle". Subsequent issues were emblazoned with the names of (in order): The Question, The Peacemaker, Nightshade, Judomaster and Captain Atom. The six covers incorporated a foreground illustration of the named character, over a background image of the entire team which formed a continuous image when all six issues were placed in line.