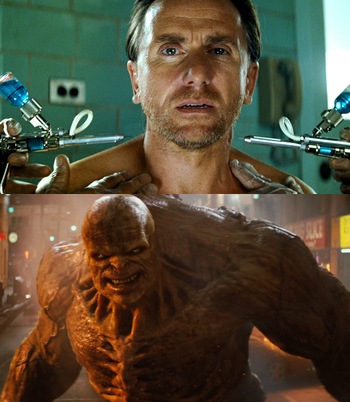 WARNING: Super Serum side effects may include:
Abnormal muscle and bone growth, alopecia, psoriasis, megalomania, and thinking the Hulk's a wuss.
"It's a potion I've invented where, when the patient drinks it, he turns into a axe-wielding homicidal maniac. It's basically a cure... for not being an axe-wielding homicidal maniac! The potential market's enormous!"
— Vyvyan, The Young Ones
Advertisement:

Super Serum with some unpleasant side effects, most commonly insanity. The Psycho Serum could be the result of questionable government programs Gone Horribly Wrong or freak lab accidents; the user might be unaware of the side effects... or just doesn't care. Assuming, of course, that they actually consented to it in the first place. Consequences include, but are by no means limited to:

Since the idea is that it makes one more likely to be victorious (usually in battle) despite the above, it's closely associated with the concept of Race To The Bottom.

A form of Drugs Are Bad. Not to be confused with Power-Upgrading Deformation, where the ugly appearance is the cause of the superpowers, not a side effect. See also Bottled Heroic Resolve, when this trope is applied systematically. See Chemically-Induced Insanity for cases where causing insanity in the user was the whole point to begin with.

This item is available in the Trope Co. Catalog