Recap / Buffy the Vampire Slayer S3E4 "Beauty and the Beasts" 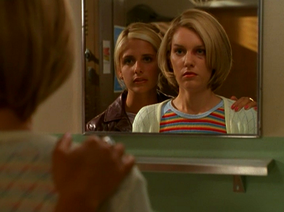 The night before a full moon, Willow reads from The Call of the Wild to an agitated Oz locked up in the library cage. Xander shows up for the second shift—or rather, snoozing. Meanwhile, Faith and Buffy are making a sweep around Sunnydale. Faith displays a cynical view of males, while Buffy dodges her questions. They talk about Scott and how much Buffy likes him, but is still planning to take it slow on account of her previous history with men. A boy is attacked brutally in the woods.

The next day, Buffy talks to Scott and his friends, Debbie and Pete, who are also a couple. Buffy reveals that she has to go and see Mr. Platt, the school psychologist. Debbie sees him, too, because she has "success issues". Buffy gives Scott a quick kiss goodbye and leaves for her appointment.

Xander and Giles find out about the murder the night before. They discover that Xander slept through his watch and that the window in the pen is open. Everyone is horrified that Oz may have escaped and killed somebody.

Buffy talks to Mr. Platt about her life as vaguely as she possibly can. She finds in him an understanding figure—unlike Debbie's description—and begins to open up to him more and more. She seems to be on her way to resolving her issues, but on patrol that night, Angel tackles her in the woods. Animalistic, he is no match for Buffy, who chains him up in the mansion. He growls at her like an animal. She discovers the spot on the floor where she left his ring; it was scorched by Angel's body on his return.

At the same time, Willow, Xander and Cordy enter the morgue to inspect the mauled body. Willow seems the only one unfazed, but she faints as soon as she is done collecting her samples.

With everyone else unavailable, Faith stays in the library with Oz. Buffy comes in and receives a hard punch for startling her. Buffy sends Faith away and spends the night searching for answers about the return of Angel. The next morning, Giles finds her asleep around books about demon dimensions and Acathla. She tells him she had a really vivid dream that Angel came back. Giles doubts it could happen, there being no record of such an event. He goes on to explain that with time passing differently in Hell (as Buffy found out in "Anne") anybody who returned would have endured seemingly endless torture. Only with extraordinary character would one be able to have retained any semblance of ones self. Most likely they would've become a monster. Willow arrives to inform them that her investigation was not conclusive. Buffy is anxious as she wonders if Angel was responsible.

In the cafeteria, Buffy sits with Scott, whose mother is insulted by Pete along with the school counselor. Buffy decides to leave for the mansion, where she finds Angel huddled in a ball. She tries to touch him, but he jumps at her. She rushes out, scared.

Pete and Debbie sneak into a room to make out. Pete discovers that one of his jars has been emptied and wants confirmation that Debbie didn't drink from it. Buffy returns to Mr. Platt's office and pours her heart out, then realizes that he is dead, he was mauled too.

Pete yells at Debbie, then turns into a monster with very noticeable veins running across his face. He tells her that he needed the substance before to turn into the monster, but now her grating voice is already enough for him to transform. At first one could see his behaviour as a form of steroid rage, but it quickly becomes clear that this is a case of domestic violence, since he begins beating Debbie, then apologizes, turning back into his human self. She forgives him.

In the library, the gang discuss the recent murder. As it happened during the day, Oz is exonerated (as is Angel to Buffy's relief, although she has still not told anyone of his return) to everyone's relief. The Scoobies must look for a murderer who kills during the day.

Oz meets up with Debbie and gives her his study notes as promised. He notices her black eye, but she lies to Oz, telling him she fell on a doorknob. He lets her know he will listen if she decides to talk. Meanwhile, Pete is watching and seething.

The gang have discovered the killer, and they leave Oz in the library to look for Pete and Debbie. Buffy and Willow find Debbie in the locker room and try in vain to talk sense into her, but Debbie foolishly tries to defend Pete and his actions. Meanwhile, Angel breaks free from his shackles, and Pete finds Oz in the library. He turns into a monster and beats up Oz. Then the sun sets, and Oz becomes a werewolf, thus leveling the playing field. Buffy and the rest of the gang arrive to stop the fight, but when Buffy tries to tranquilize Oz, Debbie deliberately pushes her gun away and Buffy ends up shooting Giles. Buffy chases after Pete while Willow and Faith follow Oz.

After a struggle, Faith manages to hit and knock out Oz with a dart. Buffy follows Pete's blood trail, but he finds Debbie first, and despite her pleas and her attempts to appease him, he kills her. Buffy finds Pete, but he knocks her to the ground and advances threateningly on her. Angel arrives on cue and he and Pete begin fighting; after knocking Angel aside, Pete turns his attention back to Buffy, but Angel gets back up and, using the chains still binding his wrists, snaps Pete's neck, killing him. Afterward, he turns his attention to Buffy, but instead of attacking her, reverts to his human face and calls out her name before collapsing to his knees and embracing her in tears. Overwhelmed with emotion, and more confused than ever, Buffy begins to cry as well, finally accepting that Angel is back.

The next day, it is revealed that Pete had concocted a chemical potion that made him more macho when he became afraid of losing Debbie, but eventually he became monstrous himself. Buffy tries to console Scott, who has lost two of his best friends. Buffy visits the mansion, where Angel sleeps through an apparent nightmare unshackled. The episode ends with Buffy reading from The Call of the Wild.