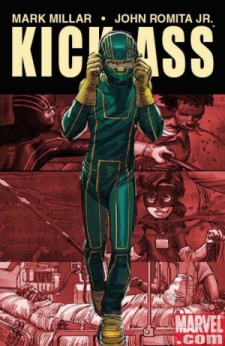 Tunk you, asshole!
It didn't take a trauma to make you wear a mask. It didn't take your parents getting shot or cosmic rays or a power ring. Just the perfect combination of loneliness and despair.
Advertisement:

In a nutshell, Kick-Ass is about the notion of comic book fanboys moonlighting as superheroes. A teenage outcast decides to become a superhero, leading him to meet other would-be heroes, most notably Big Daddy and his Ax-Crazy daughter Hit Girl. Also in the mix is the Red Mist, a hero with a secret.

Written by Mark Millar and penciled by John Romita Jr., and published by Marvel.

A sequel was serialized in CLiNT.

It should be noted that the comics have a slightly odd book numbering scheme. Kick-Ass (i.e., the first volume) was Book 1, but the ending of Kick-Ass 2 revealed that that sequel was actually Book 3. This segued into the Hit-Girl interquel, written later but designated as Book 2. Kick-Ass 3 followed, set after Kick-Ass 2.

Compare with Doméstico, a very similar comic in both story and design, released one year prior.

Adapted into a film in 2010, with the sequel adapting both the Hit-Girl interquel and the second volume of the comic.

In 2018, the comic returned, however this time following a new character taking up the Kick-Ass mantle.

Not to be confused with the trope Literal Ass-Kicking.