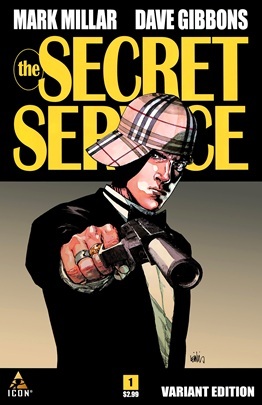 From the writer of Kick-Ass and the artist of Watchmen...who didn't draw this cover.
A 2012-2013 six issue mini series written by Mark Millar with art by Dave Gibbons. The story follows Gary, a teenager from East London who is living with his mother and her abusive boyfriend Darren, whilst spending his nights committing petty crimes. That is until his uncle Jack reveals to him that he is a secret agent and wants Gary to train to join the service. What follows is a James Bond-style spy thriller with crazy gadgets, mad scientists and world ending plots.
Advertisement:

Has been loosely adapted into a movie by the title of Kingsman: The Secret Service directed by Matthew Vaughn and starring Taron Egerton and Colin Firth released in February 2015. After the release and success of the film, all subsequent collections and reference to the comic renamed it to Kingsman, a term that does not show up anywhere in the book.