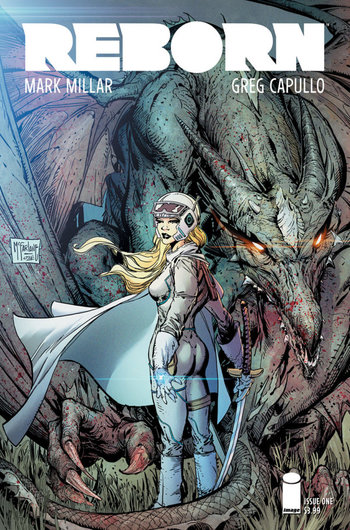 Written by Mark Millar (Kick-Ass, Wanted and Nemesis) and drawn by Greg Capullo (Batman), Reborn is a Science Fantasy comic series from Image Comics revolving around a simple question: where do we go when we die? Not Heaven or Hell, but somewhere else where the war between good and evil wages for all eternity - the souls of the innocents, the noble and the righteous end up in the realm of Adystria, while the evil, the wicked and the damned are sent to the the Dark Lands. Our main protagonist is Bonnie Black, a very old widow living in a retirement home, who fears dying. She eventually passes away from a stroke and ends up in this afterlife world, much younger and dressed like a magical warrior. She reunites with her long-dead father Tom, who is a mighty warrior and defender from Adystria that saves her the moment she lands in this dimension, in the middle of a battle against the Dark Landers. He reveals that she is The Chosen One that will save this world from Lord Golgotha, the Dark Lands ruler who aims to conquer Adystria to heel before him and also has more sinister plans whom needs to be stopped at any cost.

The first volume is composed of 6 issues, published between 2016-2017, and is entitled "Book One". Not to be confused with the Reborn! (2004) manga and anime series. Or the fourth novel in The Adversary Cycle.