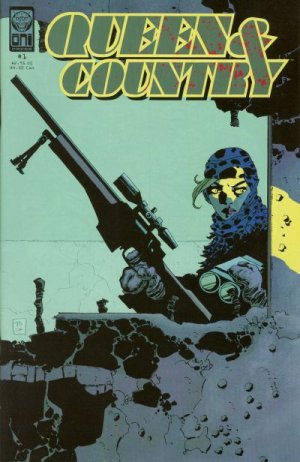 "There's a trick, they teach it to you at the School. When someone pulls a gun on you, they say...charge at him like a bloody lunatic... It's the last thing they expect and most of them can't hit water from a submarine anyway...and repeat to yourself over and over that you're doing this for Queen and Country."
— Tara Chace, "Operation: Broken Ground"
Advertisement:

Queen & Country is an Oni Press comic book and Bantam Publishing novel series written by Greg Rucka about a group of spies in the Special Operations Section of the British Secret Intelligence Service (MI-6), called "Minders". The main character is Tara Chace, Minder Two. The series is known for a few things: the ridiculous amount of research Rucka does for each issue, the series' similarity to The Sandbaggers, and just how realistic the whole thing is.

Characters in the series are:

The first series has finished with 32 issues, three prequel volumes, and three novels, (the comics nicely collected in four omnibus editions). Operation: Broken Ground was the first published, but chronologically, they go:

A film adaptation to be directed by Ridley Scott has been stuck in Development Hell for some time.