Spoilers for all comics that take place before this event (Time Runs Out and Before Time Runs Out comics included) will be left unmarked. Events relating to titles in the Last Days may or may not be marked as spoilers. 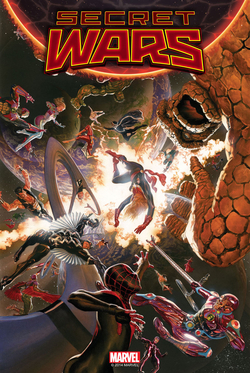 Can the combined might of the Multiverse's most powerful superheroes defeat the ultimate menace?!
The multiverse was destroyed!
The heroes of Earth-616 and Earth-1610 were powerless to save it!

Now, all that remains... is Battleworld!
A massive, patchwork planet composed of the fragments of worlds that no longer exist, maintained by the iron will of its god and master, Victor Von Doom!
Each region is a domain unto itself!

Secret Wars is the name of the nine issue 2015 Marvel Comics Crisis Crossover storyline that serves as the namesake to the story and the many tie-ins to the comic. To differentiate it from the original storyline, it will be referred to as "Secret Wars (2015)". This story serves as the definitive Grand Finale for both the Ultimate Marvel Universe and the original Marvel Universe, along with dozens of other Alternate Universes that get caught up in the crossfire. It should be noted that while the story will end with the creation of a new Marvel Universe with a brand-new history, it is not explicitly a Continuity Reboot, as all surviving characters will retain their memories from this event and the stories that preceded it.

The Multiverse is collapsing, due to the increasing influence from a race known as the Beyonders, the genocidal actions of the Maker, the near-total destruction of the Web of Life and Destiny, and the cult surrounding Rabum Alal - a figure better known as Victor Von Doom. Realities have begun crashing into one another, both being obliterated if the Earth of one is not destroyed before impact. For some time now, The Illuminati, a secret alliance of the world's leading superheroes, has tried to defend their home of Earth-616 from these "Incursions". Ultimately, their actions have let their universe be one of the final ones left standing, alongside the Ultimate Marvel universe of Earth-1610; but despite their best efforts they fail at preventing total collapse and the Marvel Multiverse is destroyed in one last Incursion. But, in the wake of both Universes, a new world is created: Battleworld. Comprised of not only New Yorks similar to that of Earth-616 and Earth-1610, but also New Yorks and other cities of various universes, the heroes of the two worlds must unite to figure out a way to restore their world in some capacity. If they can survive the various evil forces lying in wait.

The conclusion to the long-running storylines in Vol. 5 of The Avengers and Vol. 3 of New Avengers, Secret Wars officially kicks off in The Avengers #44, New Avengers #33, and Miles Morales: Ultimate Spider-Man #12 before bleeding into a nine-issue mini-series starting in May 2015 and running into January 2016. In September 2015, a brand new Marvel Universe started up, referring itself as All-New, All-Different Marvel, which has elements of the original universe and the Ultimate Universe, but it is unknown as to the full effect. It should be noted that every series in this event is said to shape the face of the ANADM Universe. As the story unfolds, umbrella titles are used to tell more of the story. These are:

Because this will have Loads and Loads of Characters, Marvel has set up a virtual map of Battleworld

to show you who is all involved. The folder below will cover all universes and characters described there.

open/close all folders
Regions of Battleworld

In addition, the following regions exist as locations in or around Battleworld, but have not been labeled on the map:

It goes without saying that this event is massive, and that a number of titles are going to tie into the event. Some titles appear to be taking the place of others over the duration of Secret Wars, similar to what happened to the X-Men line during Age of Apocalypse.

Many series were cancelled in order for this event to take place, with several titles being replaced by new titles for the duration of the event. Some titles were not cancelled for this event, though they still tie into Secret Wars by taking place on or around Battleworld. However, these stories are not labeled under the Last Days, Battleworld, or Warzones! banners.

Titles not altered for Secret Wars

Following this event, a new, much smaller Marvel Multiverse will be created, operating under the "All-New, All-Different Marvel" label. While it is confirmed that most new stories will be confined to the new mainstream Marvel Universe, there will be offshoot universes following the event.