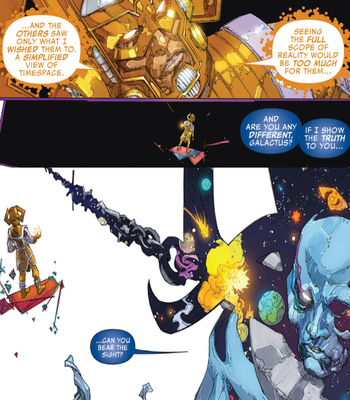 Ah, The Omnipotent. The ultimate Story-Breaker Power. A Reality Warper able to do whatever they please or imagine despite physical or natural laws. A character in this class of power is nearly impossible to challenge.

Until they meet THIS guy.

This is a special type of No-Sell made especially for when two god-like beings collide. If two unique characters are "omnipotent", then there have to exist limits to their power. Logically speaking, two characters that can literally do anything is impossible, because just having individuality is technically a power. So in a contest of warpers, the one who will win is whoever can No-Sell the most. In such a scenario, if Omnipotent Being #1 is usually able to turn anyone to salt with just a thought, Omnipotent Being #2 is either immune, or can prevent or reverse that power with their own effort.

Sometimes, the entity in question simply encompasses a larger sphere of power: a Genius Loci, Odd Job God or Anthropomorphic Personification of a defined place will typically lose to a Cosmic Being, a Dimension Lord, a Multiversal Conqueror, or capital-G God. Being the God of Horses is fine, but it doesn't help you much against the Spirit of All Living Things.

At other times, each deity is a Principles Zealot and can be undone by a Logic Bomb or a bit of Rules Lawyering. In these cases, it doesn't matter how much power the opposition actually has, because the victim's own limits defeat them. These rules, or whoever imposes them, are what's Even More Omnipotent than either god.

So in order for this trope to be in play:

A Sub-Trope is More Than Infinite, which is when a plot suddenly breaks an omnipotent mechanic to resolve a conflict. See My Kung Fu Is Stronger when it involves martial arts.