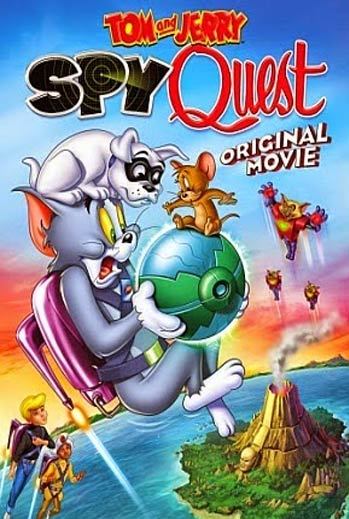 Tom and Jerry: Spy Quest is the 11th film in the Tom and Jerry Direct to Video Film Series. The infamous Cat and mouse join forces with another franchise also created by Hanna and Barbera, Jonny Quest. The film was the first appearance of JQ characters in non-parodic media since The Real Adventures of Jonny Quest ended in 1997 (barring some cameos in Scooby-Doo! Mystery Incorporated).

Tom and Jerry hit the beach and get caught in a chase by Tin, Pan and Alley who are after Jonny, Hadji and Bandit. Tom and Jerry tag along and find themselves alongside Team Quest to stop another world altering scheme by none other than Dr. Zin.

This film marks one of the few occasions that Tom and Jerry have been directly marketed with a Hanna-Barbera branded franchisenote Tom and Jerry is technically a Turner Entertainment franchise, at least so far.