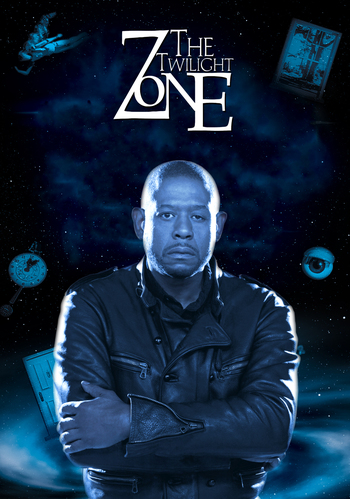 No peace of mind, no escape from the shadows of doubt, no light to guide you out of the murky depths...
"You're traveling through another dimension, a dimension not only of sight and sound, but of mind. A journey into a wondrous land whose boundaries are that of imagination. You are entering the Twilight Zone."
—Forest Whitaker, Opening Narration
Advertisement:

The second TV revival of The Twilight Zone (1959), this series aired on UPN during the 2002-03 season. It aired in hour-long installments, with two half-hour episodes run back-to-back, the only exception being the one-hour episode "The Lineman". Forest Whitaker was the on-camera host. The series ran for 44 episodes.

It featured the first sequel episode in Twilight Zone television history: "It's Still a Good Life", in which Bill Mumy and Cloris Leachman reprised their roles as Anthony Fremont and his mother Agnes 41 years after starring in "It's a Good Life". Mumy's real life daughter Liliana Mumy played Anthony's daughter Audrey in the episode.

Submitted for your approval: