Not Afraid of You Anymore 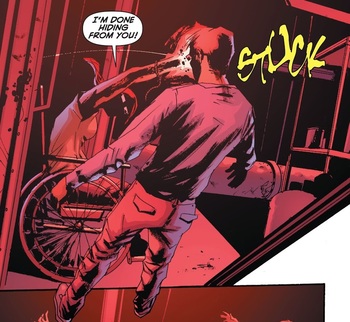 "The pain is gone, I've succeeded. I feel strong too.
I'm not afraid of you anymore!
You won't kill me, I'll make you pay for everything you did to me!!!"
— Ariel, Drowtales chapter 8

In fiction, it's common for a character who has been abused or mistreated by another to eventually confront that person in order to move on with their life, and they discover that the person really was never as powerful as they thought and that the abuse they suffered was the result of that person's own issues and insecurities. The abused may even take pity on the person who hurt them and decide that they're Not Worth Killing, and this is often the first step in a Humiliation Conga, as well as the culmination of an Hourglass Plot where the one-time victim ultimately overpowers their abuser.

An unpleasant subversion of this takes place when, after being confronted, the abuser turns out to be even more dangerous than the abused realized. Unfortunately, this can and does happen in real life. Not all bullies back down when challenged, some are neither cowardly nor insecure, just vicious. A double-subversion occurs if the character still isn't afraid of them after what ever happens afterward.

Compare Face Your Fears and Challenging the Bully. See also Calling the Old Man Out for a parent-specific variant of this. Not to be confused with I'm Not Afraid of You, when a threat loses its power (or disappears entirely) once a character is no longer afraid of it, nor Grew a Spine where it's more about making one's choices and acting on it rather than standing up to oneself.

After many years trying to escape the owl monster in her mind, Eda finally faces it and turns the tides in her favor, shrinking and subduing it when it tries to run away from her.

After many years trying to escape the owl monster in her mind, Eda finally faces it and turns the tides in her favor, shrinking and subduing it when it tries to run away from her.