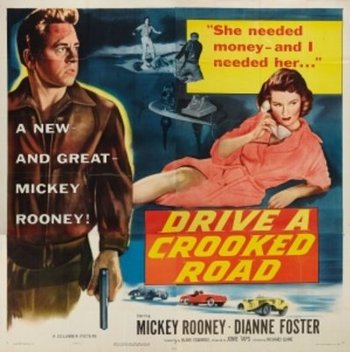 Eddie Shannon (Rooney) is an undersized sports-car mechanic who dreams of racing an expensive car in a European meet. He meets and falls in love with Barbara Mathews (Foster), and thinks she loves him. She introduces him to Steve Norris (Kevin McCarthy) and Harold Baker (Jack Kelly), who ask him to drive the getaway car in a bank robbery they are planning. Eddie refuses, but changes his mind after some gentle persuasion from Barbara. The job is pulled off and, following a wild getaway, Eddie learns that Barbara was just using him and that Steve and Harold have plans to kill him. Gritty retribution is just around the corner.

Tropes in Drive a Crooked Road: