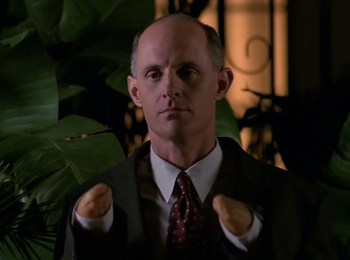 At Angel Investigations, Cordelia and Doyle are discussing the need for actual income to match the outgo from their business when Angel comes upstairs and tries a sip of the week-old coffee. Cordelia relentlessly reopens the subject of fees with a stubbornly resisting Angel. They both appeal to Doyle, who starts to weigh in with his moderate and wise view that paying for their rescue would actually give some clients a sense of closure. Before he can make his point, however, Doyle is wracked by a vision about a woman named Melissa Burns. At the office where Melissa works, she and her co-worker fiddle with a cake so they can wish a happy birthday to their supervisor, Penny. As Penny blows out the candles, another co-worker arrives with a flower delivery, but instead of being for their boss' birthday, the bouquet is addressed to Melissa. The message from "Ronald" disturbs her so much that she retreats to the bathroom to take tranquilizer pills, then leaves the office. Down in the parking garage, Melissa is startled by a dark-clad figure waiting near her car. Oddly, she seems relieved to see Angel, even though he is a stranger to her. Angel awkwardly tells Melissa that he knows she's in trouble, and he wants to help her. Not very reassured, she declines his services, but does take his business card.

At the ATM, Melissa is having trouble getting access. Ronald approaches and informs her that he changed the PIN on her bank account. He seems unaware of his arrogance, as well as of the inappropriateness (verging on delusion) of speaking to her as if they were in a lasting relationship. He also reveals that he knows she took the pills earlier, and this encounter scares Melissa enough that she calls Angel Investigations for an appointment. During their meeting, Melissa informs the team that Dr. Ronald Meltzer is an acclaimed neurosurgeon who performed critical surgery on an infected nerve behind her eye. He has also been stalking her for nearly seven months, ever since she allowed him to take her out—once—because she felt obligated to thank him. Melissa swears, moreover, that even when he's not around, she can feel Meltzer watching her and tells them that Meltzer knew she'd taken the tranquilizers despite there being no possible way he could have seen her. At home that night, Melissa gets ready for bed. Meanwhile in his own study, Meltzer sips a drink and seems to watch a framed photo of Melissa on his desk. When we finally see Meltzer's face, there is an empty socket where his right eye should be. Back in Melissa's bedroom, a disembodied eyeball floats behind her, following her every move.

Angel goes to ask Kate, his "friend at the police department," whether Melissa ever filed a complaint. Kate tells him that a report was indeed filed, but Meltzer's lawyers, Wolfram & Hart, took strong measures to protect their client, even going so far as to take out a restraining order against the plaintiff. Unaware of his dark past, Kate also tries to give Angel some insight into a stalker victim's mindset. She believes that even when Melissa is physically safe, fear will continue to haunt her, unless she can get angry and start to fight back, mentally and emotionally. Kate offers to detail a uniform to watch Melissa's place for a night or two, and Angel accepts. While Doyle plays bodyguard and accompanies Melissa to work, Angel breaks into Meltzer's office looking for leads. One of the books from Meltzer's shelf disappears swiftly and smoothly into Angel's jacket. When his unauthorized presence is discovered, Angel plays on Meltzer's megalomania, pretending to have a beloved wife needing emergency eye surgery from a topnotch neurosurgeon—price, of course, being no object. Angel gives Meltzer his undercover name and phone number as he leaves. In another part of the clinic, Cordelia interviews a colleague of Meltzer's who reports he has a well-deserved reputation for very difficult work with severed nerves and near-miraculous success in reattaching limbs. She goes on to tell Cordy, however, that Meltzer never shares his techniques and findings with the medical community at large.

Back at AI, Angel searches for information about Vinpur Natpudian, the author of Anything's Possible, the book he stole from Meltzer's office, then sends an email requesting a meeting. The author, a doctor himself, tells Angel that Meltzer attended many retreats with famous yogis, and was able to master a combination of psychological and physical techniques that make the neurosurgeon an expert in "psychic surgery" as well. That night while Melissa sleeps, Ronald's hands—just his hands—crawl across her apartment floor, then crawl under the covers of her bed. When the cop on patrol spots a man lurking in front of Melissa's building, he confronts Meltzer, but backs off when the apparently harmeless gentleman reveals that he has no hands. Hearing screams a few minutes later, the cop rushes into the building and searches Melissa's room, but finds her apparently alone. Just as he lets down his guard, Meltzer's hands attack from behind and strangle the cop to death.

Frantic, Melissa runs outside, only to be caught and held before she can reach the street. Her panic subsides a little when she discovers herself in Angel's concerned embrace, and she begins to sob in reaction. Neither Melissa nor Angel sees Meltzer watching secretly from behind the bushes. The police arrive on the scene and Kate comes over to ask Angel how, given the lack of evidence, he thinks the stalker could possibly be the perp. Doyle also shows up, and confesses to being deeply unnerved by the idea of a stalker-turned-murderer (with AI staff between him and his victim), as well as by the crawling hands thing. Angel and Doyle take Melissa back to Angel's apartment and, while Doyle starts the job of taping up every vent and doorjamb, Angel counsels a newly-resolute Melissa over tea in the kitchen. Cordelia buttonholes Angel and then, as they take the elevator upstairs, tells him what she thinks of his plan to go after Meltzer alone. As Angel searches the phone book for a place to get steel boxes in which to keep various body parts separate, Cordelia answers a call from Meltzer himself on the special line. Meltzer instructs "Mr. Jensen" to bring $100,000 for his "wife's" operation. Unaware that his cover has been blown, Angel shows up, with a safety deposit box but no money. Having remained seated, Meltzer feints subtly to his left, then shoots Angel in the neck with a hand-held dart gun. Meltzer explains that he developed the injector device while working with wild animals and that the dart carries a paralytic drug designed to stop the heart. Picking up a scalpel, Meltzer stands as Angel convulses and falls to the floor.

Meanwhile, Cordelia and Doyle look after the sleeping Melissa, their traumatized client finally able to relax thanks to Doyle's special mixture of whiskey and tea. Despite the duct tape all over Angel's place, when Meltzer arrives, he sends an eyeball to watch from the landing as one hand sneaks in to open the door for him. Once inside, he pauses while both eye and hand reattach themselves. Meanwhile, Meltzer's left hand creates a diversion by loudly rattling the sewer grate in an apparent attempt to jimmy Doyle's security. When there's a sudden silence, Doyle opens the grate to see, and the hand grabs him and pulls him down into the sewers. Simultaneously, Meltzer grabs Cordelia from behind and wrestles her into a closet. Awake, Melissa watches as Meltzer waits for his left hand to crawl back to him and climb his leg to reach his wrist, but she doesn't scream this time. She stands up to her terrorizer, telling him she's through being afraid of him. As Melissa's confidence increases, Meltzer rails at her, accusing her of leaving him for a "vacuous L.A. pretty-boy," and his body begins visibly to deteriorate. At that moment, Angel shows up, obviously not killed by Meltzer's drugged dart. Controlling his shock, Meltzer spits his teeth at Angel, who blocks the bite and tries to close with his opponent. When Angel comes within reach, Meltzer attacks with his scalpel, but Angel twists and the blade is embedded in his shoulder. As Angel backs up a few steps, Meltzer throws his hand at Angel's throat, but Angel breaks its grip and flings the hand away. Seeing it try to scuttle back to its owner, Angel reaches up to his shoulder, yanks out the scalpel and pins the wriggling hand to the floor. Before Dr. Stalker can recover his balance, Angel rushes him and literally kicks his head off.

The next day, the Angel Investigations team just finishes discussing the fate of Ronald Meltzer's parts when Melissa drops by the office to thank everyone. After she gives them a houseplant, the conversation quickly winds down until, at Cordelia's insistent signal, Angel reluctantly brings up the matter of the bill. To Angel's relief, Melissa seems sincerely grateful for the reminder of her other reason for stopping by. She matter-of-factly takes an already-prepared check from her purse, gladly hands it over (to a very quick Cordelia), then earnestly tells Angel she hopes never to see him again. Bemused, Angel concurs.