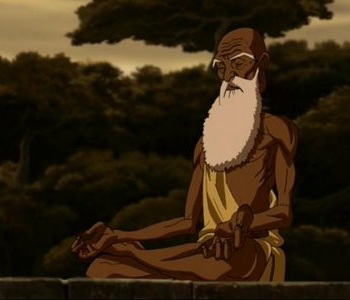 150 years old. Thank the banana onion juice.
Wisdom is a lot wiser the further away it is; any old thing written down by some bald old man with lots of Xs and Zs in his name is bound, under this rule, to sound more wise than the same thing written by the man next door. This especially applies if the putative wise man lives above the snowline. No-one says "If he's so wise, why isn't he on the beach?"
— The Discworld Companion, Terry Pratchett and Stephen Briggs
Advertisement:

The Hermit Guru lives on a mountain, in the desert, or any place suitably remote. The guru is usually male, but even the wise witch who lives in a cave could qualify.

Very often, he is an Old Master and/or has Enlightenment Superpowers.

The guru could be crazy in a comedy or parody, often as a direct consequence of his seclusion.

Although this trope has died out in the real world due to greater modernization and population density, in fiction it still thrives as a way for protagonists to gather wisdom.

Compare Reclusive Artist and Intelligence Equals Isolation. Sub-trope of The Hermit. Often overlaps with Barefoot Sage, Bald Mystic, and To Be a Master.