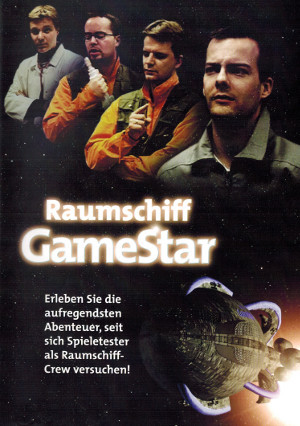 Top: Dr. Chris, SO Peter, First Mate Martin, and Captain Langer. Bottom: The (second) GameStar, in all her CG glory note on the cover of the first DVD omnibus, released after season 3; the text on the bottom-left reads "Experience the most thrilling adventures of any starship crewed by game reviewers!"
"Oh Gott, wir werden alle sterben!" Ger. "Oh God, we are all going to die!"
— Captain Langer's Catchphrase
Advertisement:

between 1997 and 2004 and released on CDs (later, DVDs) that came with each issue. The magazine editors and layout designers were cast as either the heroic crew of the Cool Starship GameStar (e.g. with the editor-in-chief playing The Captain) or the villainous adepts of The Dark Side commanded by The Emperor. They travel the universe and fight each other for no apparent reason.

The series was first and foremost a continuous Affectionate Parody of classic and contemporary Video Games, TV Series, Films, and Science Fiction literature, with the most noticeable pastiches being of Star Trek (the goodies) and Star Wars (the baddies). RSGS ran for five seasons and 58 episodes, about six minutes long on average, and was discontinued when the original editor-in-chief left the magazine. It was released in its entirety on DVDs twice but never translated from German. Nowadays, it can also be watched for free on the official GameStar YouTube channel

In June 2009, the series was seemingly Un-Canceled, with the release of a trailer (watch it with English subs here

) parodying the Star Trek's. However, as of December 2009 issue, this proved to be a Real Trailer, Fake Movie: instead, the third season of the Spiritual Successor to RSGS, Die Redaktion, started "airing".