Brain with a Manual Control 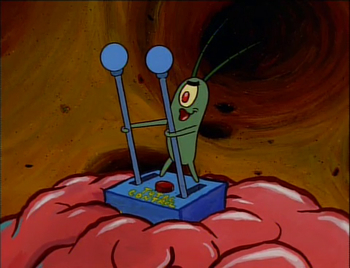 "Get out of my head! Leave my brain alone!"
"My brain has a control panel?"
— Snap, ChalkZone
Advertisement:

Using means such as a Shrink Ray or something similar, a character physically enters another character's body and they find out that the brain is actually a control room, complete with a cockpit that allows them to take direct control of the victim. Usually what follows is the guy behind the controls taking advantage of this situation and using the cockpit to fulfill their (often selfish) goals while the victim acts like a manually controlled robot.

Note that this does not necessarily have to be in the brain, nor does it have to involve someone invading another person's body - this trope refers to any situation where a character can be controlled from the inside of their body using a manual control device found inside. Can overlap with the Ghost in the Machine when there are actually any workers in the brain room — usually, however, there are none, which raises the question of just why is there a control room in the brain in the first place.

A part of the Mind Manipulation tropes. See also the Journey to the Center of the Mind and "Fantastic Voyage" Plot.