This Is Your Brain on Tropes 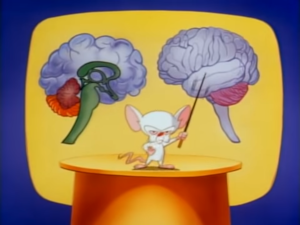 The Brain elucidates on the brain.
Any questions? If so, good. Asking questions is how brains grow.
Advertisement:

But this isn't necessarily about you, this is about your brain.

To clarify, the tropes listed below are more about the organ itself, rather than the mind it contains or using "brains" as a term for intelligence, though there is some overlap. For tropes about those other aspects of the brain, see the indexes and supertropes listed to the right, below the picture of the appropriately-named laboratory mouse.

Tropes of the Brain: