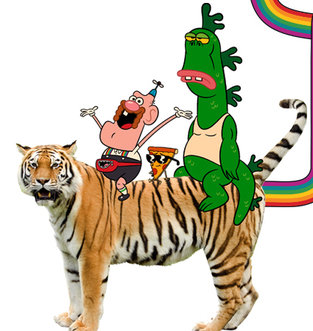 GOOD MORNIN'!note From L to R: Giant Realistic Flying Tiger, Uncle Grandpa and Belly Bag, Pizza Steve, and Mr. Gus.
"Let me get this straight. He's my uncle, and my grandpa?"
"No. He's everyone in the world's uncle and grandpa, and when he comes to visit, it's sure to be a time you'll never forget!"
Advertisement:

Okay, so what happens when you take the zany artwork of Don Martin-era MAD, throw in visual gags and slapstick that would make the Golden Age animators shed tears of pride, add a spoonful of heavy metal, and then contaminate the batch with large portions of pure, undiluted weirdness?

What you're left with is Uncle Grandpa, a Cartoon Network original concerning the larger-than-life adventures of an Crazy Is Cool Reality Warper who, as the above quote implies, is the uncle and grandfather of everyone in the world (don't ask).

A typical plot would start with Uncle Grandpa traveling in his RV like a madman, usually crashing into the homes of disgruntled youths. To them Uncle Grandpa is nothing but a bumbling nuisance in rainbow suspenders and an insanely portable fannypack... ahem, "Belly Bag", but it's only when events start to blow out of proportion (usually the result of his attempts to win them over) that the Let's Get Dangerous! side of Uncle Grandpa springs into action. Together with the help of a pizza slice, a green lizard man and a giant realistic flying tiger (again, don't ask), he and his young companion-of-the-week embroil in an epic battle, and once the day has been saved, our protagonist has gained a great deal of respect for their Uncle Grandpa, only to find that he has already left the scene, ready to spread his magic upon the lives of other unsuspecting folk:

Advertisement:
"That's your Uncle Grandpa for ya. Drops in, shows you a good time, and then you never see him again. Just like your father."

Pete Browngardt originally pitched Uncle Grandpa in 2008 for the cancelled animated shorts vehicle Cartoonstitute (the same project which spawned Regular Show). When the finished cartoon was released through the Cartoon Network website, it quickly became a word-of-mouth hit within the animation community, eventually going on to be nominated for an Emmy.

The character then went through a couple of years of Development Hell, only to reemerge on an episode of the equally surreal Secret Mountain Fort Awesome (also by Browngardt). When SMFA got axed Browngardt decided to switch gears and focus back on Uncle Grandpa, expanding its cast of characters and retooling it as a Variety Show, with almost each episode backed up by a short B-story that sometimes given other characters created by the crew their chance to shine. He succeeded, and the show eventually premiered in September 2013 much to the delight of fans of the original shorts. Even The Golden Age of Animation purist John Kricfalusi seems to have been pumped for the show judging by these sketches

Is in no way related to "Grunkle" Stan Pines.