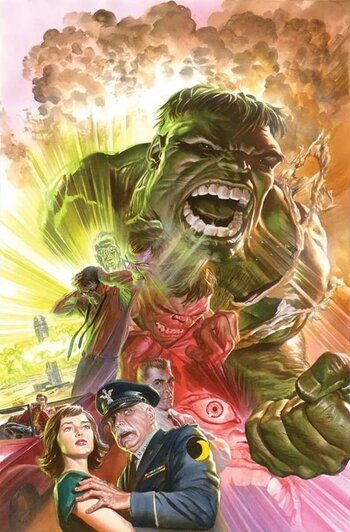 The Green Goliath. The Jade Giant. Ol' Jade Jaws. The Creature. The Big Guy. The Worldbreaker.

He first appeared in "The Incredible Hulk" Vol. 1 #1 (May, 1962), created by Stan Lee and Jack Kirby. This original series was unsuccessful and was cancelled by issue #6 (March, 1963), but by then Lee had taken a shine to the character and he was used as a guest star in various series for the next few years. The Hulk got his second chance at solo stardom as one of the two features of "Tales to Astonish", issues #60-101 (October, 1964-March, 1968). The title was then renamed to "The Incredible Hulk" Vol. 2. He appeared in issues #102-474 (April, 1968-March, 1999). Since then he has starred in several relatively short-lived titles.

This eventually led to Banner taking a level in Badass and the next event — Fall of the Hulks. Afterwards, inspired by the positive reception of the character in The Avengers, the Hulk was given a new, more heroic direction in Indestructible Hulk, working for S.H.I.E.L.D. in exchange for using his Hulk persona to attack enemies, and once again a member of the Avengers. It ended on a cliffhanger with Banner getting shot in the head, leading into the next relaunch, Hulk, as Tony Stark's attempt to cure Banner resulted in the creation of a new Hulk incarnation, Doc Green, intent on "curing" the other Hulks, whether they wanted it or not.