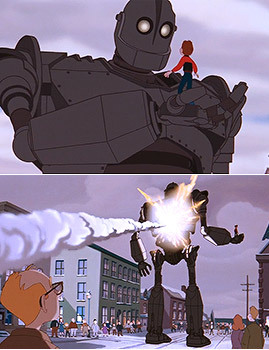 Whenever the powerful and dangerous but misunderstood monster is being calmed down by their best (usually small human) friend, Love Interest, or Morality Chain with a Cooldown Hug, someone, whether on purpose or accident, will rush in and attack.

Candidates include: a twitchy Red Shirt, the "real" love interest to the hugger who is scared/jealous, a Knight Templar on his crusade, or an angry General Ripper who can't stomach a non-violent resolution. If this doesn't end in tears with the monster's death, then he'll just rampage some more and jump away. Expect the attacker to be berated, possibly demoted, but just as often left in power and unrepentant with his tactics. The hugger may or may not lose their calming ability afterwards, especially if they agreed to it as a plan to attack the monster.

Usually followed by the hugger suicidally running towards the massed array of guys with guns shouting "No! He's not a danger anymore!" Heaven help the ill advised ambushers if they harm the hugger in the crossfire, because there is now no one standing between them and a literal Unstoppable Rage. Bonus points if the attack is a large explosion which would hurt the hugger, forcing the beast to shield them and abscond with them to safety. More generally, this can sometimes apply to efforts made to stop Let's You and Him Fight or Right Hand Versus Left Hand, and as such is a form of Poor Communication Kills.

If the huggee does not, in fact, respond to the attempted hug and hurts the hugger, or does so accidentally trying to hurt those that interrupted the hug, expect an immediate reaction at having kicked the Morality Pet.