Comic Book / Tales of the Jedi 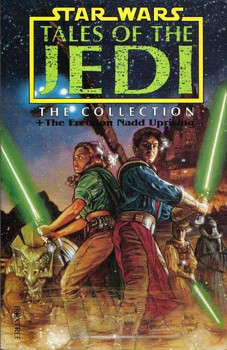 A Star Wars Legends comic book series from The '90s, about the adventures of the Jedi Knights thousands of years before the Star Wars films. It originated from ideas in two other separate series: backstory and Jedi lore in Tom Veitch's Dark Empire, and the origins of the Sith Lord Exar Kun after his appearance in Kevin J. Anderson's Jedi Academy Trilogy. Tales began as a collaboration between the authors, but the later parts ended up written by Anderson alone.
Advertisement:

The Tales of the Jedi series is split into two parts. The first (written by Anderson and Tom Veitch) deals with the fall to the dark side of the Jedi Knights Ulic Qel-Droma and Exar Kun and their subsequent war against the Old Republic, four thousand years before A New Hope. A prequel series (written exclusively by Anderson) was later published, taking place a further thousand years earlier and showing the fall of the Sith Empire during the Great Hyperspace War, explaining and elaborating upon several important points which formed the background of the first series.

The importance of this series for Star Wars Legends is hard to understate, as it established many critical parts of the universe's lore. Moreover, it led directly to the critically acclaimed Knights of the Old Republic video game, which in turned paved the way for Star Wars: The Old Republic MMO. These games have spin-offs of their own, and they all owe that to the Tales of the Jedi.

The main story arcs in chronological order are: