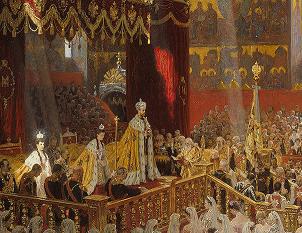 "The hands of the king are the hands of a healer, and so shall the rightful king be known."
— Ioreth, Wise Woman of Gondor, The Return of the King

Royal Blood! It's real, it's significant, and only the person who's really got it is suitable for the throne. In Fantasy, it may actually endow the person with magical powers, or even be required by the land (and, unfortunately, making it useful in Blood Magic). Features even in SF for a Feudal Future. And when it comes to being Offered the Crown, Royal Blood may encourage them to choose you.

Useful rule for at least curbing a bloody Succession Crisis. On the other hand, the Arranged Marriages to preserve it may lead to Royally Screwed Up Families, especially since the parents, and grandparents, etc. of the bride and bridegroom were also, likely Kissing Cousins (the Arranged Marriage is very common, although fictional royalty find it remarkably easy to throw off the arrangements, marry for love, and face no repercussions. Like, say, war in the event of a dynastic marriage). Heir Club for Men and I Want Grandkids are common.

In combat, No One Gets Left Behind applies with particular force to those of Royal Blood. Even if they are dead, the soldiers often go to great efforts to recover the body. Leaving aside issues of honor and loyalty, there is also the grim necessity of being able to establish that this person died, so that succession can be more or less orderly (Especially since this often occurs in time of crisis).

Idealistic stories on the Sliding Scale of Idealism vs. Cynicism generally have the rightful king also be the better ruler. More cynical stories split them up, and then even Lawful Good characters may support the worse ruler because the one who would be a Reasonable Authority Figure would create a dangerous precedent in ignoring the laws of succession. Royal Blood may require your putting up with Royal Brats, The Evil Prince and The Caligula — all the time, if it's Villainous Lineage.

Super-Trope of Royalty Superpower and Really Royalty Reveal. Almost always required for the Rightful King Returns. May lead to the Man in the Iron Mask or Hidden Backup Prince. Will likely be inherent in a Princess Classic and Prince Charming. Obviously common in the Standard Royal Court or Decadent Court. Will often appear with Ermine Cape Effect and Requisite Royal Regalia, where royalty uses visible clothing to show off their status — all the time. Conversely, Modest Royalty may appear humbly dressed all the time (in Real Life, royalty will usually dress practically, and in special circumstances, dress to impress).