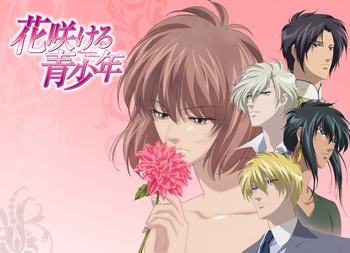 Hanasakeru Seishōnen (花咲ける青少年) is a manga series written and illustrated by Natsumi Itsuki. Set in the modern era, the story follows the path to romance of fourteen-year-old Kajika Burnsworth, daughter of powerful industrialist Harry Burnsworth, owner of the Burnsworth international conglomerate giant. Kajika agrees to participate in a "marriage game" with her father, in which she must select her future husband out of three men that her father has supposedly preselected for her.

Despite its shōjo-romance undertones, the story itself evolves as a power political mystery involving a small, middle eastern country called Raginei. Raginei as a country is only 1,000 years old, but became extremely wealthy within the last 50 years or so due to a change in ideals implemented by past King Machaty that allowed the international export of oil. While Kajika searches for her suitors and puzzles over the concept of love, the country is thrown into political turmoil and Kajika's friendship with Prince Rumaty Ivan, as well as the Burnsworth relationship with Raginei, lands her right in the middle of it all.