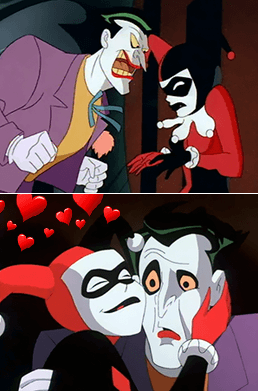 Truly the definition of a healthy, loving relationship.
Moze: Why don't you just tell Missy the truth? You're not interested in her.
Ned: Because the truth doesn't work on crazy people!
— Ned's Declassified School Survival Guide
Advertisement:

When Alice loves Bob and there is nothing anyone can do — not even Bob — to persuade her that their love isn't mutual.

This is not just All Love Is Unrequited or Oblivious to Love. Bob is well aware of this one-sided crush, but his protests fall on deaf ears. He can tell Alice he isn't interested, sometimes violently, but she invariably fails to catch on. Her behavior often straddles the line between Clingy Jealous Girl, Stalker with a Crush or even Psycho Supporter, but she generally means no harm to Bob and also respects his ideals. If she does start becoming an actual threat to Bob or other people close to him though, then beware...

If Alice has terrible taste in suitors (and she usually does), then her "hubby" or "wifey" will abuse that unconditional love to further their crazy schemes and never hesitate to betray her if they fail, or if she gets too whiny. Y'know, because whining can cause headaches and stuff. And of course, the innocent (or more like oblivious) Alice will come trotting back for more punishment. If she has two neurons bobbing around in her skull, she'll be puzzled that her hubby/wifey has a "funny way" of showing love. If she has more than three, she'll eventually realize that Mr. Troubled, but Cute is just plain Trouble and move on, but she'll find it hard to resist falling back to him.

Expect Alice to be a headache for anyone in the center of a Love Triangle or Love Dodecahedron involving Bob. Third parties trying to convince her that she should move on will face replies like "You're Just Jealous" and other psychological barriers to reality and sanity.

Either gender can be a Mad Lover, for a beloved of either gender. It's just more common to have females in the role because this is often a comedy trope, and a clueless woman clinging to an exasperated man is much funnier than the reverse. Some writers adore this dynamic and like to keep the 'relationship' alive by giving Alice an occasional moment of affection from Bob, just to make everyone wonder what's really going on.

See also Hopeless Suitor and Rejection Affection, for less crazy examples of unrequited love from which this trope borrows some elements from. Compare with the more serious Love Martyr, a character in an unhealthy relationship whose love is meant to be selfless and noble (or at least sympathetic) instead of crazy, funny, and/or stupid. May overlap with Abhorrent Admirer. Compare Minion Shipping and Unholy Matrimony. Contrast with Vitriolic Best Buds, where this involves friends and may be mutual.