Her Code Name Was "Mary Sue" 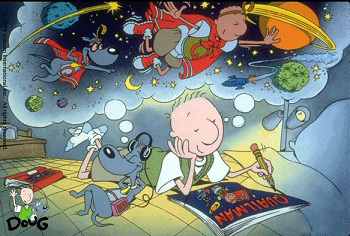 "The great William Dewey didn't struggle! He was good at everything on the first try, just like me when I wrote this play!"
— Mayor Bill Dewey, Steven Universe, "Historical Friction"
Advertisement:

A form of Stylistic Suck. Whenever an in-universe author or creator not established as being a (passable) writer creates a story, the main character will be a blatant Author Avatar Mary Sue. Whatever they want, their character gets. Often, all the other primary characters will have their actual fictional counterparts of their own as well, usually with one or two traits exaggerated greatly and generally portrayed in the light that the character sees them. This may include the villain of the story being based on a character the writer doesn't like. Most of the time, these stories will be treated as being pretty bad by the other characters (whether or not they express it depends on how nice they're feeling), and the work will often raise implications about their friend's desires and feelings about the people around him that will raise eyebrows. This is all usually Played for Laughs, however, the trope could also be used to tell the audience what the character writing the story wants and what he thinks of other characters, etc.

See also Parody Sue for the trope this draws upon and Dream Sue for the prototype. Compare Write Who You Know and Muse Abuse. When they're demonizing other people in the story, see Revenge via Storytelling.

open/close all folders
Self-Demonstrating Version
The world was in serious danger! Aliens researching fiction within fiction, who looked a lot like an awful high school chemistry teacher, were threatening to destroy Earth if not presented with information on what tends to happen when fictional characters write stories! Humanity was doomed...

...until suddenly, the great Report Siht arrived! As women all around swooned, he held up a hand towards the aliens, and boldly stated:

"When a fictional character decides to write a story, the main character of the story is extremely likely to be an obvious Mary Sue Author Avatar."

"Really?" was the stunned aliens' only reply.

"Frequently," Report explained, "the writer won't stop there: other characters will also have suspicious similarities to people the writer knows and will play roles matching how the writer sees them. The hero's love interest will be based on the writer's crush, the Big Bad and/or the guy who's Too Dumb to Live will be someone the writer dislikes, and so on. There's only about a 50/50 chance that the inspiration for the love interest will pick up on this."

Nearby, a girl suddenly realized how incredibly attractive Report was and decided she wanted to have his babies ASAP. By an astounding coincidence, she happened to have an identical name, appearance, and personality to a girl Report finds attractive.

Report continued his explanation. "After a while, it can start looking like the real writers are using it as an excuse for an Elseworld. In some cases, these similarities extend to the plot as well, with the Mary Sue facing the same problems as her creator, or ridiculously exaggerated versions."

"But... wouldn't that sometimes be used as a symptom of Stylistic Suck?" said Report Siht's best friend who is a lot like mine.

"Yes, although not always. Does that answer your questions, ugly and clearly unknowledgeable aliens?"

The chemistry aliens were most impressed. "Thank you, Report Siht. We completely misjudged you. You are clearly very intelligent." With that, they left.

As everyone cheered, the President of the United States gave Report a medal. "You saved the world, Report," he said. "We are forever in your debt."

"There was nothing to it," Report said. "After all, this trope is Truth in Television."

Later in the book, Tim gets kicked to death by a shire-horse. Tom's dad cheerfully informs him that he really enjoyed writing that bit.