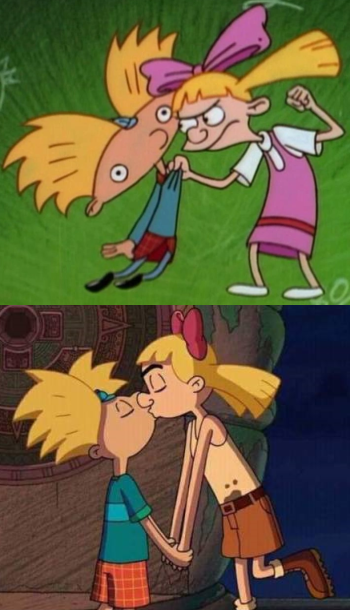 You sometimes hurt the ones you love.
Advertisement:

When someone bullies someone else because they have a crush on them. This is usually because they aren't sure how to convey their feelings properly. Often the bully is a Type A Tsundere.Note There is actually a sub-type known as "sadodere", combining the words sadistic and sweet. The target of the bullying is generally under the impression that the bully is simply mean and has no clue the bully has a crush on them.

This is generally Played for Laughs and won't normally get into serious violence unless the target is Made of Iron. This sometimes overlaps with Double Standard: Abuse, Female on Male. Romanticized Abuse and Domestic Abuse are the significantly less innocent Sister Tropes, and Fetishized Abuser is the Darker and Edgier one. Contrast Mad Love, a generally comedic trope wherein the one in love cannot figure out that abuse is not the sign that their beloved returns their affections.

If the bully eventually changes their ways, this becomes Reformed Bully or Bully Turned Buddy.

Truth in Television for some small children who lack the concept of relationships and usually grow out of it.