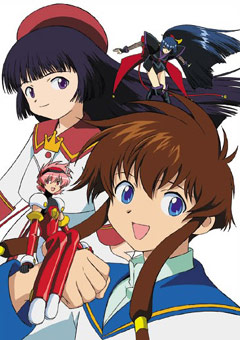 A typical shounen Tournament Arc series, save that it's done by CLAMP (who are better known for their shoujo works), has a predominantly female cast without being a Bishoujo Series, and involves fighting dolls controlled by the player's mind.

The manga originally ran in Shonen Ace from 1999 to 2001. It was initially brought over to North American markets by Tokyopop, though Tokyopop's financial troubles caused the license to lapse. The manga license was later picked up by Dark Horse Comics for distribution, so the manga is in print in omnibuses. As for the anime series, it was initially brought over to North Americans markets by ADV Films with an English dub, but following their collapse, the license went to Sentai Filmworks, ADV's successor, reusing the ADV dub.