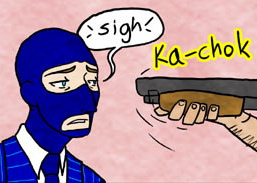 The series in one image.
Advertisement:

Cuanta Vida (abbreviated CV) is a popular Team Fortress 2 fancomic by Kieran Thompson, also known as Kytri or Heironymus. It started on October 12th, 2008 and ended on December 9th, 2011 with 159 pages.

The story is centered on a BLU Spy (commonly referred to as Bleu) who has just arrived at 2Fort, though he's never been in a war setting before. Finding the similarities between the BLU and RED corporations suspicious, Bleu begins to investigate, and stumbles upon several hidden places, relationships, and, most importantly, a plan to escape the meaningless fighting...

The comic is well-praised for its storytelling, weaving Bleu's narrations into the main events, and especially well-loved for its focus on something the Periphery Demographic feels is sorely lacking in the original narrative: Romance. The comic also presumes that the "classes", rather than being unique characters in and of themselves, are instead Exactly What It Says on the Tin: Job roles to be filled by many different people with equally unique motivations, some of them far saner than the originals... and many of them much more unwilling to fight a pointless turf war.

(Link leads to the comic's Itch.io page. The comic has been taken down on its original site and on DeviantArt, but it can still be accessed via the Internet Archive

After Cuanta Vida was concluded, Kieran Thompson moved on to, and is continuing to make, the webcomic This Is the Worst Idea You've Ever Had!. Many alternative reality versions of the Cuanta Vida characters appear as secondary characters in this series.

WARNING: It's safe to assume that just about any link on this page contains spoilers. Click at your own risk.