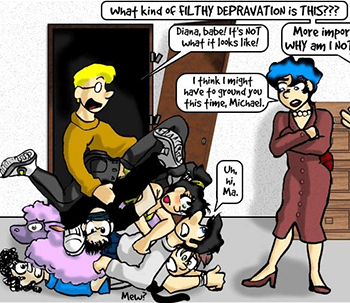 Eventually it all falls apart.
"I seem to be spending a lot more time in closets since I got 'ere."
— Bleu the BLU Spy, Cuanta Vida
Advertisement:

Someone has to hide some person from parties out searching for them, or whose presence would be rather awkward to explain. So they quickly herd the person into a closet, into an adjoining room, under a bed, or some other place (the more cramped and uncomfortable the hiding place, the more Hilarity Ensues).

A classic screwball comedy usage is to have this keep on happening, with new hiding places becoming harder to find or more obvious.

Close cousin to Curtain Camouflage: the major difference being that this trope is always comedic while that one is just as frequently played for drama. For added hilarity, combine with The Stateroom Sketch. Might overlap with the other kind of "closet" if the hidden character is a secret same-sex romantic partner. Can lead to an Exploding Closet.