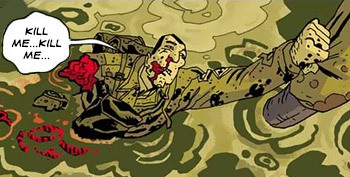 War Is Hell, but Hell sounds better than this.
"I cannot self-terminate. You must lower me into the steel."
— The T-800 cyborg, Terminator 2: Judgment Day
Advertisement:

Perhaps the Body Horror has almost completely taken over a person and with their last ounce of humanity, they beg to be killed. Perhaps they've just been wounded in a vital area and know they are going to die slowly and in agony, and just want to die with dignity/end the pain quickly. Perhaps they're losing the battle with an Enemy Within and they need the hero or sidekick to throw the airlock switch/fire the Forgotten Superweapon at them/lower them into the steel. Perhaps they are prisoners and being tortured, and the hero cannot break them free but could shoot them. In any case, while they're ready or even eager to die, they cannot do it on their own. This can also count as a Heroic Sacrifice, sometimes.

If the character is robotic, this may occur due to influence from Asimov's Laws. Specifically, a robot may not harm itself, or through inaction allow itself to be harmed, unless it is in direct opposition with the first two laws. Even when not following the hierarchical laws of robotics, it could still occur if a robot is simply programmed for self-preservation.

In a series set in Jidaigeki, this trope may appear when a Samurai character commits seppuku — ritual suicide — to redeem himself. Traditionally, a person committing seppuku, after disemboweling himself, was allowed to have a "second" (kaishakunin) behead him before the pain would destroy his composure. Sometimes, the "second" will volunteer for the job, as a token of respect for a friend or Worthy Opponent.

Instant Death Bullet is likely. Then, usually the killer has no difficulty getting to a position and attacking in a manner that would cause quick death. When the character is Fighting from the Inside, but not very effectively, the death can be long and gruesome.

The victim may plead for death even when it is possible for them to be saved, owing to the pain. The hero is likely to override that, often saying No One Gets Left Behind.

Compare to Mercy Kill, when the target cannot even request death; Death Seeker, where the target can't even find anyone willing (or capable, if the Death Seeker still wants to fight to the best of their ability); and Driven to Suicide, when they can self-terminate, though sometimes they just can't find the ability to do it themselves, and need help. Also compare Trial by Friendly Fire.

Alternative Title(s): Cannot Self Terminate, Kill Me, Please Kill Me