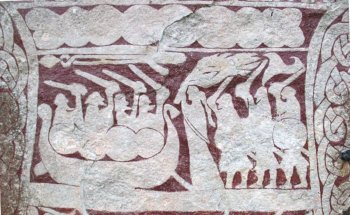 Panel from an image stone at Stora Hammars, Gotland, possibly depicting the battle of Hedin and Hogni.
Advertisement:

As Freyja takes a walk through the streets of Asgard, she sees four dwarfs forging a necklace. Freyja falls in love with the necklace and asks the dwarfs to sell it to her. The dwarfs are ready to do that, but not for money. And four nights later, Freyja walks away with the necklace.

But Freyja's lover King Odin finds out all about the deal, and forces his henchman Loki to steal the necklace. Freyja asks Odin to give it back, and is called out for her sinful bargain. But Odin is willing to forgive and return the necklace if Freyja promises to fulfill his challenge as a punishment: She must arrange for two glorious mortal kings to meet each other in a battle that will last forever.

"Sorli's Tale" is a major case of a non-indicative title: The episodes that deal with the exploits of the sea-king Sorli and his feud with king Hogni are included mainly to introduce king Hogni. The real focus of the tale is the never-ending battle between kings Hedin and Hogni, a myth also told in "Skaldskaparmal" in Prose Edda and book 5 of Gesta Danorum.

The tale takes some liberties with the Eddic version of Norse mythology and probably welds myths that were not previously connected to each other. To wit, Loki stealing Freyja's necklace is probably derived from Loki's theft of the Brisingamen mentioned in the Prose Edda, although only here it is linked with the Everlasting Battle, and the necklace in the "Tale of Sorli" is not identified as the Brisingamen.