Literature / The Song of Roland 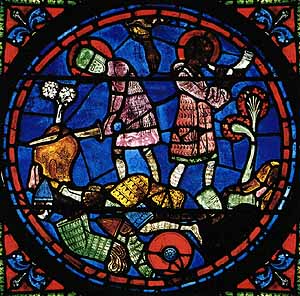 The Song of Roland (Old French, La Chanson de Roland) is the oldest surviving work of French literature, dating from the late 11th century. Taillefer, William the Conqueror's minstrel, charged into battle at Hastings singing a version of it, and if you read the version we have, you can definitely see how it would get the soldiers' blood pumping. A relatively short epic poem, having 4,000 ten-syllable verses, Roland is the closest thing to a Christian Iliad. Like the Greek epic, it was only one, though almost certainly the greatest one, of a large body of now mostly forgotten works,note e.g., The Song of William or The Four Sons of Aymon called in this case the Chansons de Geste or "Songs of Deeds." Its influence was enormous, and adaptations soon appeared in several European languages such as Latin, Occitan, and Middle High German.

Technically, the poem is written in ten-syllable lines, with strong pauses in the middle of each, and ending in assonances (or what might seem to us "bad rhymes"). Lines are divided into stanzas (or laisses) of no fixed length. The language of the poem is Old French, i.e., the language spoken in the Northern half of what is now France from about the 9th to the 14th centuries. Thus:

Carles li reis, nostre emper[er]e magnes
Set anz tuz pleins ad estet en Espaigne:
Tresqu'en la mer cunquist la tere altaigne.
N'i ad castel ki devant lui remaigne
Mur ne citet n'i est remes a fraindre,
Fors Sarraguce, ki est en une muntaigne.
Li reis Marsilie la tient, ki Deu nen aimet;
Mahumet sert e Apollin recleimet:
Nes poet guarder que mals ne l'i ateignet. AOI.
Charles the king, our great emperor, has been in Spain a full seven years: he has conquered the high land up to the sea. There is no castle that remains against him; there is no wall or town left to conquer, except Saragossa, which is on a mountain. King Marsilie holds it, he who does not love God; he serves Mohammed and calls on Apollyon; he cannot ward off the ill that will reach him there. AOI note And if you want to know what AOI means, join the club — generations of mediæval scholars have failed to determine its significance conclusively.
Advertisement:

The plot is a wildly fictionalized version of the Battle of Roncevalles or Roncevaux Pass that was fought as Charlemagne's army left Muslim-controlled Spain in 778 AD. In the opening scene, the Spanish king Marsile hatches a plot to end his seven-year war with Charlemagne by pretending to convert to Christianity and become his vassal. Receiving the Spanish messengers, Charlemagne and his barons debate who to send to Marsile. Our hero Roland volunteers his stepfather Ganelon, to his outrage. Ganelon goes, but conspires with Marsile to ambush the French in the narrow passes of the Pyrénées. The Spaniards fall upon the rearguard led by Roland, the other eleven paladins, and Turpin, the sword-wielding archbishop. The rearguard is slaughtered to a man, and when Charlemagne finds out, he gets mediæval on the Spaniards. All looks lost for the Muslims, until the Emir arrives with an enormous fleet of troop transports. Thus, we have a family conflict, nested within a conflict between France and Spain, nested within a world war between Cross and Crescent.

It can be found online here,

and in an English translation here.

The Song of Roland provides examples of: