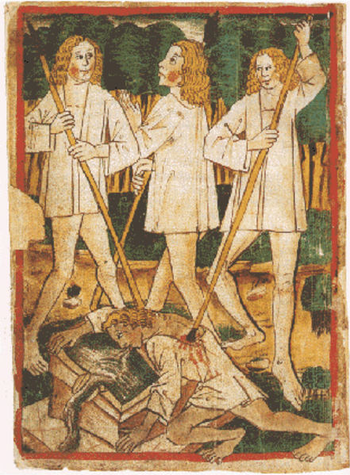 Hagen spears Siegfried in the Back during a Hunt — A 15th Century Manuscript of the Nibelungenlied
No warrior will ever do a darker deed.
— Anonymous
Advertisement:

The Nibelungenlied, translated literally as "The Song of the Nibelungs", is an epic poem in two parts, telling the story of Siegfried, his murder by the Burgundians, and the revenge taken by his widow Kriemhild. Dating back to the early 13th century, its authorship is unknown, but it is thought to have been written by an Austrian author from between Passau and Vienna for recitation in the Austrian court. The Nibelungenlied is the earliest complete telling of the legend, though other versions of the story exist, including the Norse Völsunga saga and passages in the Eddas, which, though written down later, are thought to preserve earlier elements of the story that had become obscured in the mediævalized German poem. Brief allusions to the Siegfried story also exist in much earlier works, such as Waltharius and Beowulf.

Technically, the poem is written in four line roughly hexameter stanzas, with strong pauses in the middle of each line, rhyming AABB, and with the final line of each stanza usually lengthened by an extra foot. The language of the poem is Middle High German, i.e., the language spoken in what is now southern Germany, Austria, and Switzerland, from about the 11th to the 14th centuries. Modern Germans will be able to guess roughly what a sentence is about but without training they won't be able to make out details let alone pronounce it correctly. Much like modern English-speakers with Chaucer. Thus:

The first section details the life, exploits, and death of the hero Siegfried (MHG “Sîfrit”), son of King Siegmund and Queen Sieglinde of Xanten, who achieves near-invincibility by bathing in the blood of a freshly-slain dragon, but retains a point of weakness in a place which the blood fails to cover, in this case the shoulder, part of which remains covered by a linden leaf during his gory baptism.

Siegfried marries Kriemhild (Chriemhilt), the sister of the Burgundian king Gunther of Worms, whom he assists in his ritual courting of the Icelandic queen Brunhild (Prunhilt). Siegfried's assistance is to use his supernatural strength (also gained through his earlier proximity to dragon blood) to complete the challenges in an Invisibility Cloak while Gunther mimes the same actions to give the illusion that he is accomplishing these tasks.

The political relationship of the two men, though fortified by Siegfried's services and his marriage to Kriemhild, is soured when an argument between Brunhild and Kriemhild reveals the truth about the secret arrangement and the security of the state is threatened. Gunther's solution to this comes about through his scheming vassal Hagen, who, with Gunther, plots the assassination of the hero.

The second part of the poem tells of how Kriemhild, now bereft not only of her husband but also her status and fortune (Hagen steals the hoard Siegfried had won from Schilbung and Nibelung, [the sons of King Nibelung] and deposits it in the Rhine to prevent her from raising an avenging army), she sets about to avenge her husband's death. Her first action to this end is the political marriage to King Etzel (Attila the Hun), a move which helps to rebuild her status but is regarded as an ideological dishonour, her new husband being a pagan. Later, her brother and his followers are invited to Etzel's kingdom in order to compete in the various courtly traditions of feasting and jousting, yet it is revealed to be a guise for an assassination for Gunther and Hagen. Nevertheless, they manage to abuse Etzel's hospitality with impunity until they go too far by slaying his child, and there ensues an enormous battle inside the hall, which is set alight by Kriemhild in the process. Gunther, Hagen, and their followers manage to defend themselves against insurmountable odds, until they are at last overcome by the Ostrogothic King Dietrich (Theodoric the Goth), who happens to be present at the festivities. He brings Hagen bound to Kriemhild, who personally strikes him dead — to the disgust of Dietrich's old companion-in-arms, Hildebrand, who slays her for striking down an unarmed man. Thus her bloody revenge is achieved at the cost of her own destruction.

Judging by the number of manuscripts, the poem was hugely popular in mediæval Germany. After The Renaissance, however, it lost favour and sank from view — to the point that, when the poem was rediscovered and published in a critical edition by Christoph Heinrich Müller, Frederick the Great, to whom Müller had dedicated it, famously remarked that the poem was "not worth a shot of powder" and that he wouldn't have such trash in his library. Nevertheless, the poem regained its stature in the Romantic era, and it is still regarded by many as Germany's national epic.

The Nibelungenlied is one of the sources for Richard Wagner's Der Ring des Nibelungen, though Wagner's work draws much more from Scandinavian sources; for instance, Wagner practically abandons the entire second half of the poem, and substantially ignores Kriemhild.

The epic has had a number of film adaptations, perhaps most notably Fritz Lang's two part, four and a half hour epic, Die Nibelungen (1924), starring Paul Richter as Siegfried and Margarete Schön as Kriemhild, which was highly faithful to the original epic and deliberately avoided Wagner's famous version. There's also the surprisingly popular if slightly cheesy 1966 remake directed by Harald Reinl and starring Olympic hammer-thrower Uwe Beyer as Siegfried; and the 2004 TV film Curse of the Ring (AKA Ring of the Nibelungs; Dark Kingdom: The Dragon King; The Nibelungs — The Curse of the Dragon; and The Sword of Xanten), directed by Uli Edel and starring Benno Fürmann as Siegfried.

The last named takes considerable liberties with the plot in order to emphasise a more consciously pagan agenda, which some may consider a reversal of what the Nibelungenlied represented to its own original material. On the other hand, the Lied's (possibly clerical) author himself had imposed Christianity rather awkwardly on a decidedly paganish story — as none other than Goethe once remarked, the Nibelung heroes seem to go to church largely in order to get into another fight.