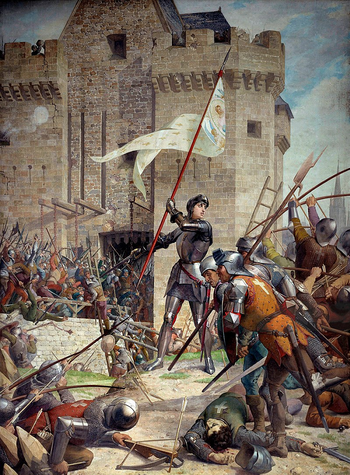 Joan of Arc at the Siege of Orleans by Jules Eugène Lenepveu, painted 1886–1890
Pretty much the entire Fourteenth and Fifteenth Centuries, though in southern Europe this overlaps with The Renaissance. This is the period where chivalry is dying, and Macchiavellian nobles are killing off kings, queens, peasants, and each other with gusto (especially if they happen to be relatives), with recurrences of The Plague generally finishing off any survivors. This is the age of the Dance of Death

, The Hundred Years War, the Wars of the Roses, The Spanish Inquisition, the early witchcraft trials, and the vivid paintings of Hieronymus Bosch. It just got as dark and edgy as Dark Age Europe again. Still, a common feature of fictions will be an idealistic character who looks forward to a day when society has left all this medieval darkness behind. (This character often gets killed.) We can blame most of these attitudes on the Renaissance, and even more on the Enlightenment when the whole 'people who came before us were really stupid' thing really started up.
Advertisement:

The typical clothing will include Nice Hats, often of disturbingly complicated structure, and surprisingly low necklines among the women; among the men, yards and yards of cloth in the sleeves and disturbingly high hemlines (Women's hemlines won't rise up until several centuries later). Both generously include lots of fur and velvet, at least among the nobility — and lots of dirt, at least among the peasants. Splotches of blood are a not infrequent addition for both.

Outside certain aspects of the Renaissance, this is generally not regarded as a happy time — and even that period tends to be darkened by poisoning Popes, manipulating courtesans, and murderous feuds among the noble clans.

Tropes associated with this time period include: