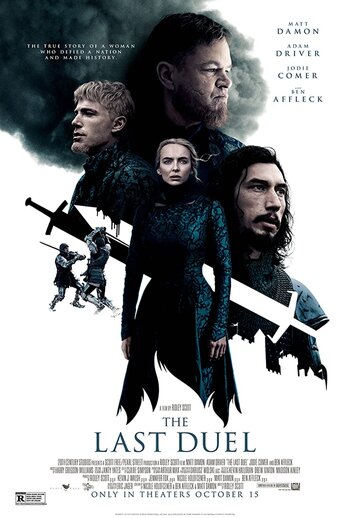 "One of us has lied. Let us let God decide."
Sir Jean de Carrouges: God will not punish those who tell the truth.
Lady Marguerite de Carrouges: My fate and our child's fate will be written, not by God's will, but by which old man will tire first.
Advertisement:

The Last Duel is a 2021 epic historical drama film directed by Ridley Scott. It is based on the book The Last Duel: A True Story of Trial by Combat in Medieval France by Eric Jager about the last legally sanctioned judicial duel in French history.

In late 14th-century Normandy, France, during The Hundred Years War, noblewoman Marguerite de Carrouges, née de Thibouville, is raped by a man who was once her husband's friend, Jacques Le Gris, who denies that this was a rape. Jacques is protected by both the Count Pierre d'Alençon and the Church, and so Marguerite's husband, the knight Jean de Carrouges, challenges Jacques to a trial by combat, to let God decide who told the truth. The lead-up to the titular duel is told in three segments, individually written by Nicole Holofcener (Can You Ever Forgive Me?) and Damon and Affleck themselves, from the perspectives of each of the three parties. However, the accounts don't always line up.

The Last Duel contains examples of: